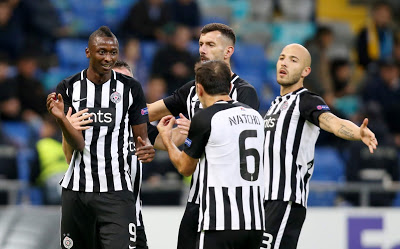 The Scottish press’s arrogance, not to mention some Rangers fans’ unfairness, has come through in leaps and bounds after Umar Sadiq went on Rino Gattuso’s want list for £10M at Napoli.

The Partizan striker, who’s been excellent his whole career bar that one season at Ibrox, is on fire this term in Serbia with over a goal every other match, and was not far off Alfredo Morelos’ level of quality in the Europa League either.

But today when the story broke that Napoli want him, the arrogant Scottish press considered it absurd because no one who didn’t succeed in Scotland can possibly succeed elsewhere.

It’s just poor how so many judge a player purely on what they did or did not do in Scotland – as if we’re the only league in the world worth measuring anything on.

In fact plenty of great players have utterly struggled in our league – Martyn Waghorn a recent example, ditto Joey Barton and Niko Kranjcar, plus going back further, Basile Boli.

These guys all did well before or after us, or in some cases, both, indicating the issues the SPL has – this backwater hatchet league is not for everyone.

And Umar Sadiq is one of those.

He will go on to be a Nigeria international, and potentially a big star in Serie A.

And we say the best of luck to him.