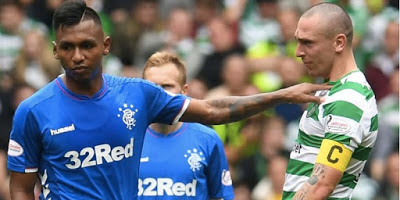 Maybe even a month ago you probably didn’t even know Erling Haaland’s name, hell you probably still don’t, but the 19-year old RB Salzberg striker is one of Europe’s hottest properties, just like 12 months ago Benfica’s Joao Felix was. Felix ended up at Atletico for £120M.

Haaland though, unlike Felix, doesn’t hail from a football power in Portugal, indeed, Portugal’s top flight couldn’t even be called a superpower any more than Holland’s or Turkey’s is.

Haaland, himself Norwegian, hails from an even less lucrative league than that in the form of Austria, ranked 12 in Europe to Portugal’s 7.

Today, Haaland is in Manchester undergoing talks with Man Utd for a £75M+ transfer from that modest Austrian league to the whopping PL.

Can you guess where we’re going yet?

Yes, Alfredo Morelos, from a league in the same ballpark as Austria, the SPL, scoring for fun, breaking records all over the place and doing it for his country as well, isn’t worth £75M. No, no no. He’s like £5M tops.

Anyone else see the issue here?

Portugal sell a player for £120M who’s never played for his country, Austria are about to do pretty much the same, and even Celtic sell players for £20M and £25M but Rangers will get 3p and a pack of Chewits for our star man.

Something doesn’t quite add up, does it?

Scottish football is obsessed with kicking Rangers where it can – taking our valuable Blue Pound to keep its clubs alive but pretending our players are worthless.