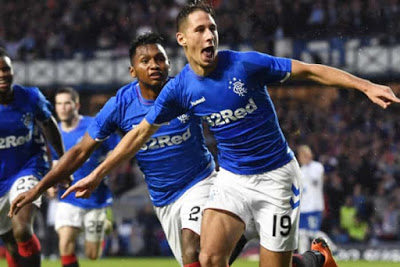 Niko Katic’s gigantic header turned out the match-winner yesterday, and the big Croat now faces an interesting time ahead.

As we brought you some days ago, Steven Gerrard has fully explained the logic about Katic and why he’s not a guaranteed starter yet, citing his full-blooded nature and as yet undeveloped patience.

He’s a defender the manager loves but sees as a project, and the former Slaven Belupo man agrees with the management of him and signed a five-year deal endorsing it.

But this doesn’t stop Rangers fans, ourselves admittedly included, wanting the giant stopper in from the start more regularly, especially given most fans aren’t exactly ardent admirers yet of big Swede Filip Helander.

So how do we proceed here?

For now, it’s not such an issue – Helander’s issue has him ruled out for at least a month, and we’d personally hazard a genuine guess we won’t see him back till March at the earliest, but either way while the winter break accounts for a big chunk of the ex-Bologna defender’s absence anyway, regardless when the sides come back in for the action in late January, he still won’t be ready and Katic will retain his place.

But when Helander does regain fitness?

Will it be a non-issue by then as Katic firmly entrenches himself as number one alongside Goldson? Or, as many fans fear, the Croat will immediately be back on the bench with the Swede’s return?

Many think Katic wouldn’t deserve it, and in truth he doesn’t, and never did – but it’s about management and making him the best defender he can possibly be. Gerrard believes he can make a world class defender from him, and we already see many signs that’s feasible.

But there’s work to do to get there, and if benching him once Helander is fit is the right path to achieving that, we’ll accept it.

Won’t stop us being frustrated, mind you…