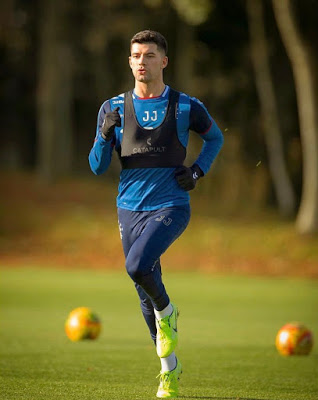 A lot of Rangers fans, ourselves included, have hyped up the front trident of Ryan Kent, Alfredo Morelos and Jordan Jones.

Or, the theoretical one anyway given it’s never been actually tried.

But with Joe Aribo establishing himself now as first choice right winger (not sure we ever thought we’d hear ourselves say that) and Kent clear first choice for the left, Jones seems destined to be consigned to the bench for the foreseeable future.

We know from experience our manager has his favourites, and we know from earlier this season Jones was never one of them – despite us needing that kind of player, and Kent not having been secured yet, Jones could not keep that left wing slot.

Indeed, Stevie went to lengths to avoid selecting him, often using the ineffective Sheyi Ojo there instead.

So we really do wonder now if Jones joins the Greg Dochertys and Matt Polsters of this world of players who just aren’t in Stevie’s preferred batch.

And with Joe Aribo now entrenched on the right wing, it does look like Gerrard will elect for Kent Morelos and Aribo as his three-way attack for the meantime.

In fairness, it’s evidently working – Aribo, while not outstanding yesterday, was reliable, and provided the winning assist – it’s hard to drop a player who’s doing the job he’s been asked to.

But equally it’s a bit of a shame that Jones’ talents are rather wasting away on the bench – we really do wonder how that front three might actually work.

Perhaps we never will.