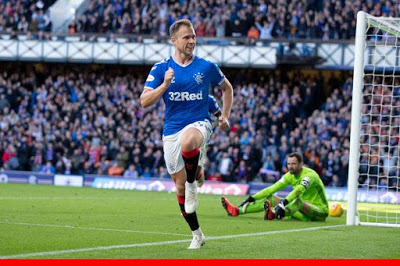 We’ve not really spoken much at all about Greg Stewart since his arrival. Truth be told there’s not strictly been a lot to say about the former Aberdeen man.

We strongly advocated his arrival, backing him more extensively than many fans did, but we did strictly refer to his limitations. We didn’t see him usurping Alfredo Morelos or Jermain Defoe up front, nor making many inroads to the wings either, but we did see him as a useful addition who had a pretty good career record, even if he was something of an overall underachiever.

And when he was overlooked against Celtic, fan reaction has been as it always is – to big up an out of favour player as Lionel Messi purely because he isn’t playing.

We all do it, including ourselves at the site, so by no means are we telling anyone off.

But since he appeared against Brentford B yesterday, and did pretty well by all accounts, the clamour for his use within the senior squad has increased tenfold.

This was never more emphasised when the frankly useless Brandon Barker was brought on ahead of him.

We do get a sense of the less he plays the better he gets in Stewart’s case. He’s had a few good performances and one notably excellent one but it’s hard to judge just how impressive he is as a player because he’s rarely had a substantial run.

We alluded to it yesterday – he’s part of that sizeable clutch of players who don’t really get much time to shine, and if fan reaction yesterday is anything to go by, he’s one the supporters want to see given more of a chance.

Do we endorse this? It can do no harm. Stewart is not a special player, nor is he a rotten one – we don’t rate him as anything astonishing but we did back the arrival of him and he certainly gives his all when he gets a rare outing.

What do you think? Would you have Stewart playing a more significant role?