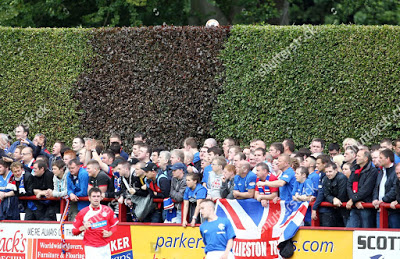 As Ibrox Noise’s Derek alluded to earlier, Rangers have a chance to qualify for the KO stage of the Europa League.

A draw may be enough, but a win would be a statement of intent. And group winners guaranteed.

And we have to say, looking at the grand picture, whatever is said about the last two results, achieving the last 32 of Europe’s second-biggest continental club competition as winners (or even as runners up) would be an absolutely flabbergasting achievement for a side pasted by Luxembourg minnows Process Unicorn only 26 months ago or so.

And compared with Brechin’s Hedge, where Rangers are now, on the precipice of joining some of the finest clubs in Europe at the business end of the Europa League, 2012 feels like a different life entirely.

Let’s not understate the gravity of this – to go from struggling against Scottish Third Division minnows despite the fact the side that took the field that day actually wasn’t even that horrific (that was still to come) to overcoming European titans like Porto and Feynoord and nearly getting one over Swiss giants Young Boys is a rags to riches story that we don’t believe Europe has ever seen before.

We’ve seen Monaco in Ligue B, we’ve seen Juventus similar – both got back to the top, but their fall was nowhere near as stark.

Whereas Rangers – plunged into the depths of the abyss, with no one but ourselves and our fans to get help from, now rise through all the divisions and go from struggling v Forfar to putting away Feyenoord.

From facing Peterhead to dispatching Porto.

We may have felt negative after Pittodrie, and Hampden, but when we wake up and smell the coffee, the progress from where we were to where we are now is spectacular.

Only four and a half years ago 9th April 2015 we were being gubbed by Queen of the South 3-0 at Palmerston Park.

Now we’ve on the verge of the last 32 of the Europa League.