Home Rangers Twice in three matches – Steven Gerrard has a big problem to... 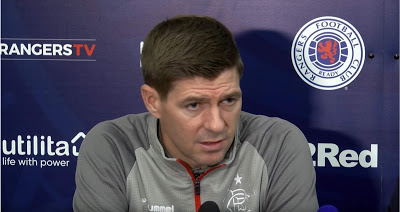 We’ve noticed a worrying pattern recently. It happened in Rotterdam and it certainly happened last night too.

In Holland Rangers were 1-0 down at half time, having played a pretty rotten first half as Dick Advocaat’s men dominated and dictated.

After half time, nothing changed – the home side continued to control for 15 more minutes, and it appeared any team talk had failed to work.

Then a three-man moment of genius involving Steven Davis, Ryan Kent and Alfredo Morelos changed everything and Rangers found themselves back in the match before amazingly leading.

But this had nothing to do with Gerrard – this was a goal from nowhere, a brilliant team goal from three men.

Last night, 1-2 up with the tide turning in Aberdeen’s favour, half time came and went, and the second half… saw exactly the same pattern as the minutes which preceded it.

Unlike Rangers re-grasping this match by the scruff of the neck, once again the visitors allowed the match to be dictated to them, to passively watch on as the home side continued to rise.

We just don’t know why this keeps happening, or what’s going wrong in the dressing room at half time when the tide is against Rangers, but something doesn’t seem to work when it comes to responses, and this squad and manager struggle with adversity when in that half time break.

It happened on September 1st – an aberration, we felt, but twice now in a few days is a lot more worrying.