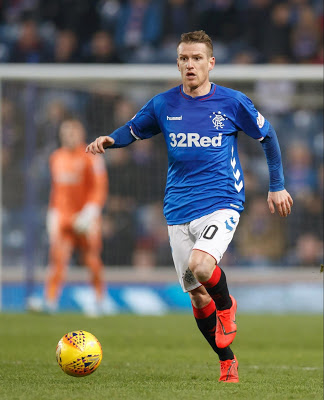 Another one we’d smugly like to point out we illustrated some days ago was the most important thing about the Killie match – and yesterday’s performance from Steven Davis was the proof in the pudding.

He was a critical fitness pass for Parkhead, and could make all the difference between the performance at Hampden and the result at Celtic Parkhead.

And he did – Steven Davis’ 78th minute cameo v Killie showed he was ready, showed he was fit again, and that fillip was the biggest boost from the boxing day result – it was more important, frankly, than the 3 points, as ludicrous as that sounds, because the influence of the Norn Irishman was beyond vital yesterday.

Having him in the XI was the biggest shot to the Rangers arm possible, and he showed how much with a monumental performance which included two goal line clearances showing all his experience.

It was a magnificent performance from the ex-Fulham man, who is, frankly, 20x the player who left.

The Davis who left often went anonymous – he could be great, but he could frequently go missing. He lacked impact too often, and for all the good he could do, there was a feeling Walter Smith was wasting him on the right of midfield.

But as deep lying playmaker for Steven Gerrard, Steven Davis, after that slow start, has been unfailingly magnificent. In many ways our best player, without necessarily getting much of the glory.

His quick mind, his quick feet, his brilliant use of the ball, his experience, and his defending (particularly yesterday) are of the top order.

All we know is he was a massive part of why Rangers came away from Parkhead with what we deserved.

And Davis is the kind of player we deserve at our club.