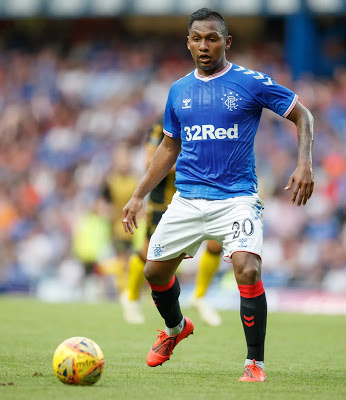 Many things worried us about last night’s painful draw, but one of them we saw coming in a way few may have.

When we published our predicted XI (which was way off, incidentally), a major selection we’d made was Jermain Defoe thinking Gerrard would want to save Morelos for the weekend.

Give him the match off and have him champing at the bit come Celtic.

Instead, Morelos was selected to start even at a venue Defoe is known to be deadly at – and had arguably his worst match this season by some distance.

We saw that coming, and it’s why we assumed Stevie would too.

Alfie has been in sizzling form this season – he was due a bad match, but perhaps better management could have saved it for a slightly less challenging venue than Pittodrie.

And we really felt he wasn’t even up for the match.

When through on goal in the first half, he wasn’t sharp enough to wake up to being onside, and proceeded to effectively jog his run thereafter. He similarly found himself diving to the floor more than once, although he was legitimately fouled plenty as well. And once the side’s morale had gone, so did his shooting as he blazed wide.

We love Morelos and we will not criticise him for a very bad night – again we hold the blame for this one at Gerrard’s feet for not giving Defoe an outing and freeing El-Buffalo for a rest and full energy for Celtic.