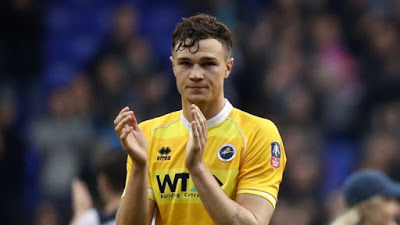 With most Rangers fans in agreement that while we love and rate Niko Katic, and George Edmundson hasn’t been given much of a chance, either way few fans overall would choose Connor Goldson as one of their favourite players.

Some think the vice-captain has seen his best days already, and some were never convinced in the first place – but with Katic seen as one for the future and a long-term project, we direct your attention to a £3M bid submitted in the summer of 2018 when Rangers sought to secure Millwall’s highly-prized Jake Cooper, then 22, who will be out of contract next summer and free to speak to any interested parties come January 1st.

And with his market value said to be in the region of £10M, this would be a stunning capture for Steven Gerrard to finally get his man next year and build the long-term future partnership for defence that Rangers fans would be truly happy with.

Two young defenders, but not too young or utterly inexperienced, both with potential market values of £10M+, with a Swedish international and young Edmundson as part of the defensive pool, could be a very very satisfying defence going forward indeed.

“I was just focused on coming in and playing for Millwall and getting a good pre-season under my belt. I love being at this club and my main priority was just to get fit to have the best chance to have a good season with Millwall. What this club has done for me has been amazing, it’s something I wouldn’t be looking to throw away. It wasn’t down to me, they put a price on me and I’m more than happy to be still at Millwall. I want to build on last season and help take this club as high as we can go.”

That price is said to be £6M, his former reported buyout clause, which is obviously now not worth anything.

What a handy free signing this could be, but Cooper is one who other clubs will certainly look at over the next month or so.

Rangers need to get in there quick.