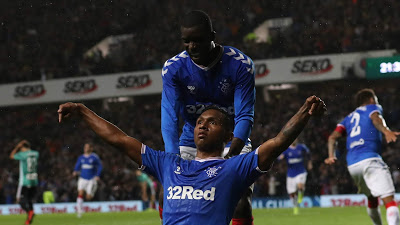 It’s that time again when star man Alfredo Morelos gets linked with a clutch of clubs, only this time the names mentioned are a who’s who of the PL in England. Aston Villa, Newcastle, Crystal Palace, West Ham, Everton and Leicester City are only six of the clubs credited with an interest in the fabled striker, and one of them, currently, is a top two side.

The Scottish press is of course frequently desperate for Rangers to sell Morelos, and Steven Gerrard has been on record, along with Dave King, to confirm Rangers will not sell even for £50M.

You know what? We believe they mean that.

Because frankly £50M for a player with his CV would be, ludicrously given the amount, a joke in this absurd transfer market.

If Brentford’s Ollie Watson is £25M, if new Liverpool signing Minamino is a ‘bargain’ at £7.5M and worth more like £25M (from the slightly less lucrative football nation of Japan), if Joao Felix at 19 cost Atletico £130M, if RB Salzberg want £76M Haaland (also only 19) – what on earth is a Colombian international with broken records all over the place worth?

It’s crazy money, but if the top rich sides in the PL want a player of this calibre, they will have to show they’re serious with bids in excess, well in excess of £50M.

And even then we don’t want to sell.

It is once again the Scottish press drumming up interest in the striker, trying to get him out of Scottish football so Celtic can have it all to themselves.

If we can hold onto this megastar, we should, and we must.

Ibrox Noise’s Derek recently suggested the player is worth £100M+ in this market, and you might laugh at an SPL player being worth that but we don’t hear you laugh at Norwegian Haaland in the Austrian top flight being worth that.

No, the rules have changed, and if your Newcastles, Leicesters or Villas want this player, records will have to shatter.

And you can quote Steven Gerrard and Dave King on that.