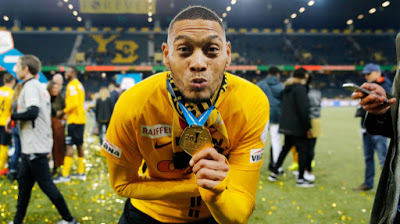 Rangers fans have a lot to be cheerful about today, with secured passage to the next round of the Europa League assured.

However, a surprise suggestion for some January business came last night in the form of one man who really did, unexpected, change the flow of the match once he arrived deep into the second half.

Until Guillaume Hoarau’s introduction, it must be said nothing was sticking up front for our Swiss guests, and despite Rangers’ admittedly solid performance, the defence was mostly untested as the home side dominated play and the visitors found themselves toothless.

Until, that is, the Frenchman arrived on 61 minutes and play slowly started to even out much more till a late flurry secured a point for the Swiss champions.

Hoarau may be a veteran at 35, but the 6ft 3 colossus made a big difference and more and more the ball stuck higher up for Young Boys.

Could this very useful attacker be a worthwhile addition in January?

Available for free in the summer, Rangers could certainly start negotiations on a pre-contract in the winter, and the man’s CV really is pretty exceptional:

A clutch of caps for France, and spells with Bordeaux and PSG, to name just two of the giants he’s been with, show the level this boy has played his whole career, plus 224 goals in 490 appearances including 4 goals in 7 UCL displays show he knows exactly how to score.

He’d be a free, effectively, and he’d be such a good influence on Alfredo Morelos – as much as Jermain Defoe is coaching him with movement, and attacking intelligence, Hoarau is much more physical, and can help fine tune the Colombian even further in terms of the big strong muscle side of the game.

As a player/coach type signing, like Defoe, Hoarau could be very decent indeed.