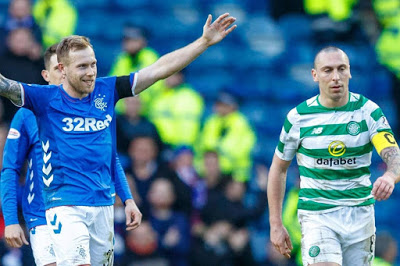 Not that we needed it, but Broony’s admission confirms Celtic are officially scared.

I have long waited for the time that Celtic will have to change to counter Rangers, and the day we “suddenly” overtake them, Broony finally says they will have to do something.

Well Broony, welcome to the world of gloating far too often, coz it finally came back to bite you, hard.

Even the mighty Porto tried to put FIVE at the back to counter Rangers.

Something is happening, and we long talked about making Ibrox a fortress again, but something beyond that has begun to take shape.

Rangers are slowly becoming a force, and the players are starting to believe, and that feels so good.

Feyenoord was the first time the team really played against one of these ‘better’ European teams and they were far from great.

Porto was the second, and we found them to be bang average.

Celtic have all the money, but just like Aberdeen, Broony, just sat back and was content with being “good enough”.

Celtic now have a major problem. Not every top player wants to play with Celtic who now have an EIGHT YEAR reputation of being gubbed every time they play in the Champions League. Yeh Broony, EIGHT YEARS of televised failures has really got to hurt.

Celtic’s problem though is not their players. The problem is they don’t play as an entire team. In regions their link-up play is sublime, but it’s isolated. It’s found in fleeting moments, which often lead to a goal, but the units are not linked together like a smoothly running machine, and that is the difference, plain for all to see.

So, Broony, if you want to make a tactical switch, start with your manager. Coz that is where your problem is.

Or better yet, stick with what you have. Works better that way, see?