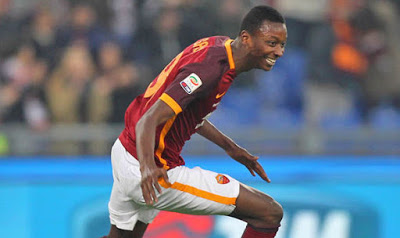 If there was one deeply unfair scapegoat made of last season’s sporadic failures (the season was a modest success overall we must say so this is not a smear of the campaign as a whole) it was the seemingly hapless Umar Sadiq.

Coming to Ibrox with a fine reputation as a rising star of Italian football with Roma, the Nigerian had had a stellar campaign in Holland with Breda scoring 5 in 12 and 3 assists.

In short, he was quality.

But that seemed to count for nothing at Ibrox – his frame was mocked, his character was questioned (including by the manager) and even though he actually played rather well in ‘that’ semi final v Aberdeen, he was dismissed as a joke and his admittedly misguided dive was held against him entirely.

He was finished after that.

Fast forward to the present day:

Sadiq has 11 in 18 for Partizan Belgrade with a staggering 10 assists, plus 4 in 6 in the Europa League.

In short, just like he did in Holland, this rising star of world football, who’s still only 22, is showing how, like many before him, the psychology and environment of Scottish football and Glasgow’s goldfish bowl isn’t for everyone, and even better players than the ex-Bologna man have failed here.

It remains unfair to this day that his time in Scotland was such a joke figure, that he was lampooned and mocked by too many who just dropped him as a dud.

True, his frame was massive and he didn’t exactly come across as the most graceful, but you simply cannot argue with his career stats in leagues which suit him. Italy and Scotland evidently didn’t, but Holland and Serbia clearly have, not to mention the Europa League in which his stats are up there with Morelos.

Of course, this is not us saying we want Sadiq back in Morelos’ place – SPL football simply doesn’t suit the giant forward.

But he’s an example of why fans are quick to judge a player a dud just because they didn’t settle quickly in Scotland.

Borna Barisic knows a bit about that…