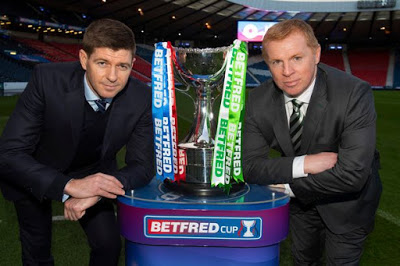 The truth is today’s cup final v Celtic is the first time since 2011 Rangers have been ready to win silverware.

Past Rangers teams have flirted with being decent, being adequate, being acceptable – this is the first one which is ‘oven baked’.

Rangers fans have suffered for 7+ years, and we’ve got the Pittodrie debacle out our systems. We’ve wailed, argued, gnashed our teeth, and it’s done. It was a bad night and even the best teams have them.

But today is a date with destiny. It’s time to win a trophy at last, it’s time for Morelos to put one away against Celtic, and this is a Rangers team capable of doing so.

Scottish football’s monopoly by Celtic is tedious. It’s excruciating, and has helped strangle the domestic game. No one has had an answer for Brendan Rodgers then Neil Lennon. Rangers haven’t been good enough, and that’s led to a procession of trophies for Parkhead, trophies they’ve not had to earn.

Rangers will not give Celtic an easy ride – they will not capitulate and let the Eastenders just take yet another cup.

True, team selection is key – and we trust Steven Gerrard to make the right calls today. We’ve said our piece on what we believe they are.

But whoever dons the shirt has to roll their sleeves up and invoke the spirit of May and December, those Rangers teams who papped Celtic.

But so much more rests on this one. This is a final, and it means even more than normal.

We believe in this club, in this Rangers, in Steven Gerrard.