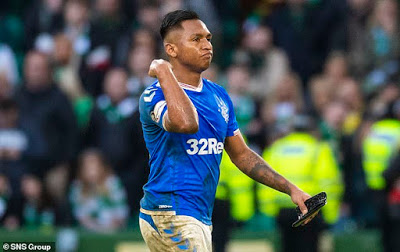 Even when faced with blatant proof of sectarianism from their ‘wonderful’ fans aimed at Alfredo Morelos, Celtic shamefully hide behind ‘we’ve not had any reports’ for a defence.

As we all know, Morelos came off following a red card, and appeared to be subjected to a torrent of abuse – we’ve seen the evidence and can confirm its authenticity – and yet to compound Celtic’s shame, they only claim they’ll investigate any reports made.

They borderline deny any of their angelic spawn could have done this, and while the video evidence is at best inconclusive with regards the accusations of racism, the bigotry and sectarianism is pretty damning.

We know Alfredo is often his own worst enemy, and has previous for goading fans, but nevertheless by the letter of the law this was unacceptable if depressingly predictable.

And even more amusingly predictable was Celtic’s refusal to condemn any of it and leave it vague at best.

We’re not surprised that they wouldn’t be harsh on the greatest fans in the world ™ but it is only insulting to the rest of us.

We’ll see if anything comes of this disgrace.