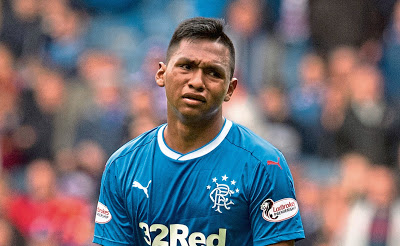 We all remember that preposterous red card Andy Halliday got for celebrating a Barrie McKay goal at Morton all those years ago, and how we’ve never seen a Celtic (or indeed any SPL player otherwise) get their marching orders.

They say FTSFA a lot, we sing and chant it, although in all fairness we’re not alone in doing so, but today’s ridiculous second yellow for Alfredo Morelos only sums up that this nonsense just doesn’t happen to other clubs, and certainly not to Celtic.

Having been smashed all match, as usual, Morelos had also been getting the usual stick from Motherwell fans the whole shebang, so when he scored ran, maybe a little misguidedly, to their loyal fans with a ‘I saw and heard you’ gesture of pointing to his eyes and ears. At least we think that’s what he was saying.

Then he got pelted with missiles from the natives, lovely.

Oh, and a second yellow card.

We know he was 3% misguided in going straight to them, but a booking for a non-offensive gesture?

It has been confirmed the gesture was the reason for the booking, and not where Morelos went, so it’s evident this was a ‘snowflake’ sending off:

Where someone is offended at someone else breathing and forms complete outrage and a strongly worded letter. Type thing.

Too many snowflakes in the Scottish game (and society, for that matter) and Morelos gets an early bath.

It was a ‘talking to’ moment, at worst, for the Colombian, not a booking.

Poor refereeing, snowflakes in the crowd, and welcome to Scotland these days.