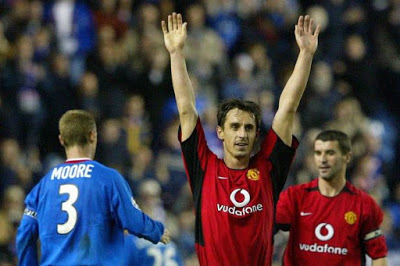 Rangers’ reward for a titanic journey through the qualifiers then group stage of the Europa League could be a stunning last 32 tie with Ole Gunner Solskjaer’s Manchester United.

Rangers, sadly, thanks to a terrible piece of bad luck on the undeserving Borna Barisic’s part, had to settle for a draw last night which means that as non-group winners the last 32 will present Rangers with the seeded sides.

And as well as the Old Trafford giants, enjoying a bit of a renaissance in recent weeks under the Norwegian, Rangers could have further colossal tussles with the likes of Freddi Ljungberg’s Arsenal, Dutch legends Ajax, and on-fire Italians Internazionale.

If any Rangers fans wanted an ‘easier’ KO match, the calibre of sides Steven Gerrard’s odds-defying legends would suggest that’s not going to happen, and we at Ibrox Noise absolutely love it.

We don’t want Zanzibar Sherif of Turkey or Wolfgang Litmus of Azerbaijan – Inter, Man Utd, Arsenal and Ajax is EXACTLY where we want to be after years of Alloa and Arbroath.

The draw will take place on Monday 16th and we for one can’t wait.

Give us anyone and everyone.