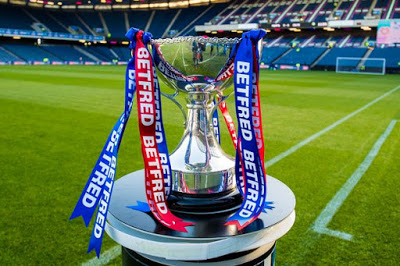 Can Rangers derail the Celtic express? According to their fans they are undefeatable. A single Celtic ball-boy has more talent than the rest of Scotland combined, and the league is so boring that Celtic only have to yawn and they win two cups before tea.

God, they are boring, and I know they are scared.

The last time we played Celtic, they changed their game big time.

Normally Celtic park five players in the opponent’s penalty box for almost the entire match. Sometimes I have seen as many as seven Celtic players inside the opponent’s box, during normal play.

Against Rangers they played defensively. They tried to control the midfield, and they played more in their defensive third.

They then relied on their speed to break out and score.

So, to the tactics. As always in these games it is moments of chance, and moments of crazy skill that often decides these games. Rangers can win with any team that Gerrard chooses to play, but sorry Felip Helander I’d rather not see you play.

This is a game where there will be a lot of speedsters, and Helander will be just torn apart on the ground, and he also has shown he is very easy to beat in the air.

This means a back 4 of Tavernier, Goldson, Katic and Barisic (hopefully fit) is essential.

In attack we also played last time with Arfield, Defoe and Aribo up front. This time it is likely that we will play Arfield, Morelos and Ryan Kent, with Aribo just behind.

This Wednesday’s draw against Aberdeen was I think the team trying out some new tactics for Sunday’s match, and though the attack worked, the defence just crumbled with Flanagan and Helander at the back showing very little in the way of communication.

The result was the team was drawn into a very defensive shell, and the team shape crumpled, which then led to Rangers just thumping the ball up the park.

Despite losing to them in September, in the last game the Celtic team really did not seem its usual, comfortable self when playing against a much-weakened Rangers, and this time we should now have a more balanced team.

Then there are all the insults and the taunts that have been flying since we were held to a draw midweek against Aberdeen.

Chris Sutton has really added to the fire by calling Tavernier a serial loser. If that does not get this team worked up, nothing will.

This is going to be a high-speed, gloves-off match, but Celtic are no better than any of the other teams we have played in the Europa League, and they are certainly no better than Feyenoord, who have talented players throughout their team.

It’s really time we brought them down a peg or two.