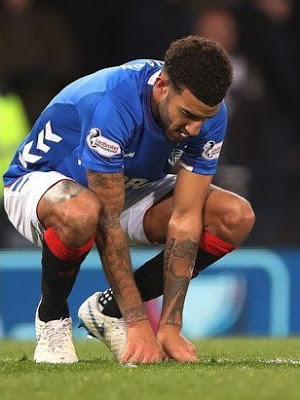 While we’ve been rambling on about Steven Gerrard’s poor defensive choices/management, there is another issue which may explain a small portion of it, at least.

One of the overriding responses we got last night was castigation of the rather hopeless Connor Goldson.

We’ve hardly been praising of this guy this season, and last night was yet more incompetence from him (among others), but there may be a reason he’s untouchable in Gerrard’s defence, and it’s not what you think.

As regular readers may recall, we’ve always been trouble by the fact he’s immune, while 3 men fight it out to be his partner.

However, they all have something in common which he doesn’t – they’re left footed.

Could Gerrard be a manager who likes a lefty and a righty complimenting each other in the defence?

Goldson is the only right-footed stopper Rangers have, and that could go a long way to explain why he always starts.

We know two lefties could well form a decent enough duo, and you don’t need to be opposed to work, but Gerrard may be a manager who wants a righty and a lefty.

The one thing this doesn’t explain is why Katic lost his place, that is a completely different story and we covered that earlier.

But it may hint at Goldson’s absolute untouchability in his slot.