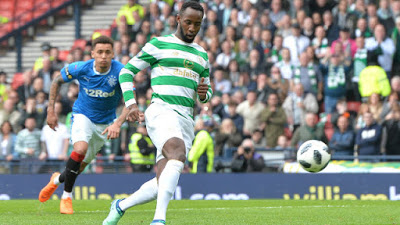 With Rangers’ colossal Old Firm showdown less than 24 hours away, recent Ibrox form has been more than solid.

Just a solitary draw at Pittodrie blights Rangers’ record in recent times domestically, and those lessons were learned when Rangers travelled to Easter Road and blitzed the home side away.

But one thing Rangers’ manager Steven Gerrard doesn’t want to be is predictable, and while the surprise he threw at Ibrox in September certainly didn’t work out, could the boss be ready to pull out a slightly unexpected but still well thought-out surprise to outwit Neil Lennon?

He certainly learned from that error, from such a bizarre selection, and hasn’t made the same mistakes since.

One we’re considering is Joe Aribo – he’s been in great form lately, assisting and scoring, and looking far more the part – but he struggled badly in September (in a similar position) and had no space to work in – with Celtic pressing hard and fast, might Stevie look at the Nigerian’s suitability for this one?

There’s also Glen Kamara. The Finn has been in patchy form this season, and Steven Davis is certainly back and available – could the former Dundee man make way for a three-man mid of Davis, Jack and Arfield?

Defence is unlikely to see any surprises – Tavernier, Goldson, Katic and Barisic will form the usual back four, but we can’t help wondering if something left-field might be deployed further up the park.

In fairness, the side delivered in the final, but just came up short with the finishing, so perhaps Stevie might keep faith with the existing XI.

But maybe, just maybe he’ll ‘try a Walter’ and change things up for tomorrow.