Home Rangers Is Steven Gerrard ready to reveal the ace up his sleeve? 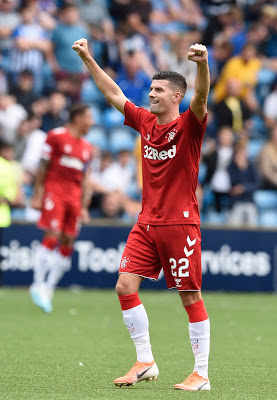 The return of Jordan Jones is certainly quite well anticipated by the support. If one position has struggled to be settled at Ibrox, it’s right wing, with a number of different players rotating.

Scott Arfield, while a great player and stellar at last season’s split in that slot, hasn’t been able to quite hold it down firmly, and of course in truth is but a patchwork solution anyway. He’s ultimately an attacking midfielder, and speedy wingplay has never been his forte.

Sheyi Ojo has been tried there too and his lack of touches on the ball (he gets less than half of the striker or other winger) and generally selfish play mean he’s generally not been regarded by most as a solution there either. An attacker who lacks maturity and decision making, and mostly isn’t terribly well-rated as a player by the fans.

While he’s been a left winger, he is indeed right footed and his absence, while not ‘keenly’ felt the past 2+ months, certainly has reduced Steven Gerrard’s options on the wings and Rangers can only benefit from a player of this quality who’s a regular for his country.

Jones, regardless of his indiscretion v Celtic in September, is by far Rangers’ best option for the right wing – quick, strong, and full of energy, the ex-Killie man is fit and available now and ready to return.

We think he’s earned the right, and frankly the ‘dream team’ of he and Kent on opposing flanks with Alfredo Morelos is something rather exciting.

And of course, Kent was signed the day after the ignominious incident so the combination has never had a chance to be tested.

You’d have to argue Jones, Kent and Morelos is as good an attacking trident as there is, certainly in Scotland, and we’d love to see it finally taking shape.