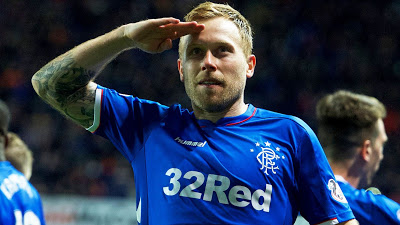 Steven Gerrard has admitted the Scott Arfield position of a free roaming 10 that worked so magnificently during the split last season has failed this time around, and the midfielder is, for now, back in a more traditional slot in front of the rear midfield two.

Arfield was superb last five matches of the season last campaign, playing in an unconventional right wing slot, albeit as more of a free-roaming 10 with licence to link up, but Stevie has admitted that just hasn’t worked this season and his return to a deeper area of the pitch is a tactical decision and one the manager believes has the Canadian skipper as the best player in the side recently.

“We felt that Scott Arfield who played extremely well as a 10 last year probably wasn’t hitting the heights as a 10 this year so we maybe wanted to make Scotty face the goal more, be involved in the action and give Scotty more tactical information and at the moment it’s worked.”

In fairness it has – we’ve seen improved performances from the former Falkirk man, with a higher level of involvement and more influence on the ball.

We never questioned his work ethic, and indeed praised the work the man does off the ball which some fans may not notice so much, but as a traditional 10 in front of the midfield rather than on the wings the workhorse is able to do more with the ball rather than just making space and running into channels.

For some reason the system during the split got the most out of Arfield wide on the right, and that hasn’t worked out this season, hence this tactical switch.

And it has definitely had a positive impact.