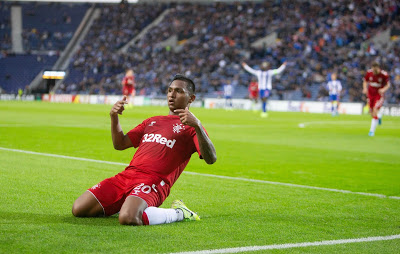 With the last 32 of the Europa League coming up fast in February, we still find ourselves mulling over the group stages, the astonishing group stages which saw Rangers secure two wins in the group of death when last place looked more likely.

However, something stood out in the stats inevitably involving star man Alfredo Morelos:

All of Rangers’ away goals came from him, with 3 of them being assisted by Borna Barisic.

Interestingly, twice the combination of the two earned a point for Rangers, both away at Feyenoord and in Portugal – the former putting the away side in the lead, the latter securing an equaliser.

While Barisic’s contribution was huge, Morelos’ influence was technically more significant away from Ibrox than in Govan – he scored just two at home, one v Young Boys to take the lead and it would have been the winner but for the Croat’s unfortunate late OG, while he scored against Porto to help secure that priceless 3 points.

But away, he got the two in Rotterdam to nail a draw and nearly a win, one in Portugal to ensure a crucial point, and that finish in Switzerland which, like in Holland, and at home to the same YB side, would have been a winner but for unfortunate defending.

In short – Morelos’ influence away from home, while yielding less points overall, was more significant as it was the draws at vital times which secured Rangers’ ultimate passage to the KO stage.

Just yet another reason the Colombian is so prized now.