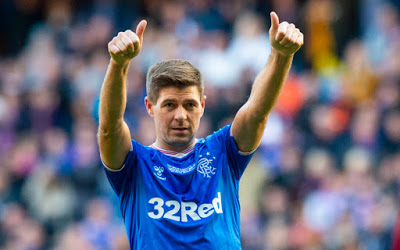 With the confirmation that Steven Gerrard has joined the ‘contract crew’ and extended his own deal at Ibrox by two years, Rangers have certainly made a bit of a statement.

The timing is certainly interesting, 24 hours before the Old Firm Cup Final, and not long after a bad result, but the intention is clear:

Rangers rate Steven Gerrard, trust our manager, and while the boss will get some things wrong, and definitely does, his benefits and contributions undeniably outweigh his flaws.

Indeed, Rangers rate him enough to give him an extra 2 years on his deal, at presumably an increased salary, increasing his possible tenure to a total of 6 years, meaning the board view Rangers’ progress under him as the ‘answer’ and the way forward.

And without doubt, the past 18 months have seen notable improvements, on and off the field.

Of course, we at Ibrox Noise have not been shy to call the errors – never were, never will be. But we’ve been much more impressed with Gerrard overall than any other Rangers manager since Walter.

He has brought us back a Rangers capable of challenging Celtic, one which is going toe to toe with our eastern rivals.

And the board can see that, the direction, and have deemed it so to tie the man down longer.

A sea change in Scottish football? Well Rangers have made a statement of intent – that we’re now invested in Gerrard and will continue to support him.

All he has done the past 18 months is successfully catch up with Celtic, but to take it over the line a trophy is a must.

But equally, this man is now officially Rangers’ future. It’s not just a fat deal till 2022 anymore, it’s 2024 now and a confirmation that theoretically, until Klopp and Liverpool part company, Gerrard will remain Rangers’ manager.

And there are certainly worse states to be in.