Home Rangers Do Rangers have a problem with James Tavernier? 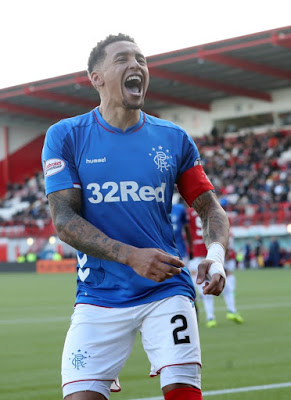 Rangers’ performance against Hibs, aside the off-ball garbage, was a display of professionalism, clinical finishing, and the kind of away performance worth its weight in gold.

Every player was in tune, making smart decisions, using the ball well, and generally being part of a smooth-oiled machine.

Every player, that is, apart from James Tavernier.

This is not a hate article – we’ve given up on him ever being ‘rested’, so we’re just calling this one as we see it, but it appears to us, unlike the rest of the team who are filled with intelligent footballers making incisive, sharp and quick decisions and clever decision, who use the space well, read the play well, and know where to go and where to pass to, that Tavernier comes across quite differently to this.

Rather than being selfish, Tavernier appears to distinctly lack football intelligence, making rather crude runs, crossing the ball early without looking, and not looking like he’s properly linking up with anyone.

Unlike the rest of the team making sharp triangles and one touch movement where everyone knows where to move to, where to run from, and how to interact with each other, Tavernier seems slower, and behind everyone.

He doesn’t look like he’s quite in sync with everyone else and just bombs down the right and bangs in crosses with nary a consideration.

This is not to say this approach stinks – he does get in a lot of decent crosses, and of course plenty of assists – but we are puzzled why pretty much every other player in the XI seems in tune with the system while Tavernier seems to be playing his own game.

It’s as if he’s on different instructions to everyone else, with the other 9 given the system and Tavernier licence to just bomb along and do his own thing.

Either this or our earlier assertion, that he’s not as clever tactically as the rest, is more accurate.

His biggest fans often suggest he is in the team because Stevie wants him to be, and he plays this way according to instruction.

So we do wonder quite why he seems on a slightly different wavelength to the rest.