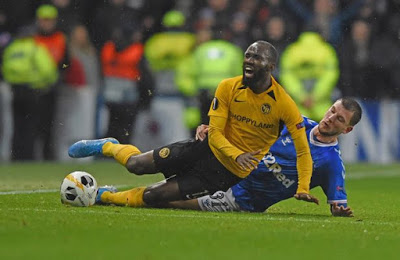 It’s been a little while since we brought you some match ratings, but after last night’s triumphant night of UEL qualification, here are some for you to chew on:

Not sure he had much more than a save to make all night. Not tested much all night, a few good catches and kick outs, and will just be furious at the conceded goal. 6

Bailed out the hapless Goldson at least once, and got forward with aplomb. Was otherwise defensively exposed occasionally, failing to track his runner, but mostly had a good shift and some of his crossing was a big improvement. 7

A load of his traditional headed clearances, but made a few key errors and lost his bearings now and then. Didn’t make any physical challenges, as always, and appeared weak, but used the ball well enough and those aerial clearances do help ease pressure. 6

For someone in from the cold it was as if he’d never been away – the early sweeping tackle indicated his intent and he made sure he got noticed. Not many clearances (just the one, in fact) but a good footsoldier to say the least and got hurt more than once. Can be pleased with his shift. 7

So unfortunate with the OG but an otherwise great shift from an accomplished LB – tracked his runner and defended resolutely, while also getting in tonnes of crosses. OG aside he didn’t put a foot wrong and we don’t even blame him for that. 8

A mixed night for an increasingly frustrating player – Kamara is neat with the ball and rarely wastes a pass (85% passing), but defensively he’s often just not switched on and both of Jack’s bookings were because the Finn wasn’t tuned in. He works hard, but we more and more wonder if he’ll ever shake off the carelessness and lack of concentration. 6

Had an excellent night and got in a tonne of interceptions, tackles and clearances. Bailed out the defence a few times, cutting out some potentially dangerous through balls. But took two big bookings for the team, and Kamara in particular, which has cost Rangers heavily. 8

A great night from a back-in-form Arfield who was a danger everywhere he popped up. Worked hard, always available for a pass, and dangerous. Useful on the ball and nearly cracked in a surprise goal. 8

A shock seeing him out on the right, but you know what? It worked. This was his most impressive performance as a Rangers player when it really mattered, and while we wouldn’t have thought he’d thrive out there, he really did – seemed a bit quicker to move the ball, and was very smooth on it – maybe could have made some slightly better decisions occasionally, but overall a tactical masterclass by Gerrard to put him out there and stifle LB Garcia who found his attentions so much he got exposed constantly. 8

Disappointing overall from Kent, a few bright energetic runs but still not really consistently hitting form. Hits some bright spots in some matches but just isn’t quite doing it yet. 6

All he had to do was score. He scored. Job done. 8

Steven Gerrard went for something a bit different, putting Aribo wide right, and frankly it helped a tonne – YB’s left was exposed constantly and Rangers were a big danger. Rangers’ manager will be frustrated that again too many good plays didn’t result in a goal, but overall Stevie got this one absolutely bang on, even if he’ll be disappointed at the late retreat. 8