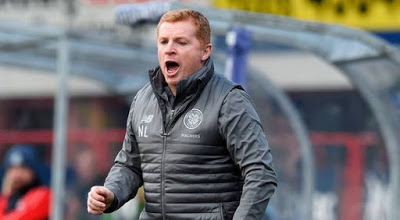 Ibrox Noise was amused to note Celtic manager Neil Lennon’s faux outrage in ‘not getting my own way’ shocker yesterday following accusations from Aberdeen’s chairman Dave Cormack over Kristoffer Ajer.

The Norwegian is accused of feigning injury by he and Derek McInnes and Celtic’s manager isn’t happy about it, but we have to laugh, we really do.

For once, in Scottish football, Celtic’s ‘feeder’ club isn’t just bowing down to the East End way of things and to see the ‘o’s forming on the lips of all those of a green and white persuasion over the idea that not everyone thinks butter wouldn’t melt with them is clearly way too much for their sensitive little souls to take.

This is iron while hot material for Rangers. With Sunday looming, a win for Steven Gerrard’s men continues to sway the domestic tide just enough to suggest that while Celtic aren’t 100% beaten yet, Scottish football is less inclined to sing from their song sheet now.

Could you imagine Aberdeen’s manager and chairman character-attacking anything Celtic only one year ago?

The tides are changing, and it is up to Rangers to hammer that home on Sunday.