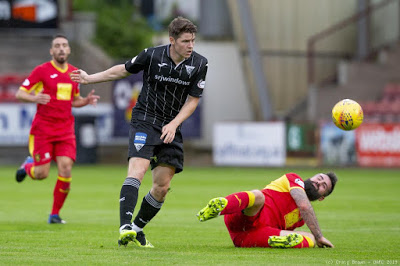 With just days till the Betfred final, Rangers have been linked to Dunfermline’s hot shot striker Kevin Nesbit.

Scouts attended the recent Thistle clash but manager Stevie Crawford has revealed no offer has been made.

It’s a strange story in many ways because with Rangers unwilling to make an offer for then-Ayr United man Lawrence Shankland, whose form was even better, we can’t quite fathom interest in another similar player from the same division.

Rangers’ ambition are higher than the Scottish Championship, and while we’re sure Nesbit, 22, is a perfectly decent striker at that level, there would be absolutely categorically zero point bringing him in.

Steven Gerrard has shown absolutely no interest in Scottish youth in his time at Ibrox, in terms of game time in the XI – and we also can’t really see the good side of signing anyone from a lower division.

The only recent Scottish Championship player to have become a true success at the top level is former Hibs man John McGinn, who has thrived for Villa and Scotland, and while we want to trust the manager’s apparent interest in this player, we don’t see what the point is.

All Scottish youth fail at Rangers – McCrorie, Docherty, Middleton, to name only 3 – they all end up either out on loan or rotting in the Dev Squad.

So why we’d target Nesbit is beyond us.