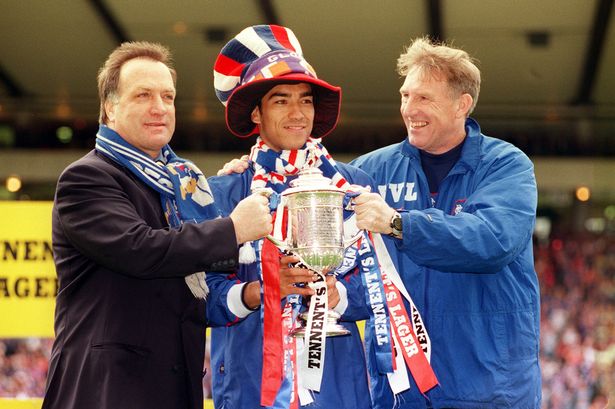 Our recent chat about Feynoord maestro Steven Berghuis got us thinking back to 1998 again, and the summer revolution at Ibrox.

Of course we’d just lost 10IAR and Walter Smith resigned along with a raft of departures of the playing squad, for Dick Advocaat to come to Govan (just like he’ll do tomorrow), which was a gamble, just like sites to bet at legally in New Jersey, and revolutionise our squad with a colossal import of Dutch stars.

Giovanni Van Bronkhorst, Arthur Numan, Bert Konterman, and Fernando Ricksen (RIP) were just four of the Oranje players to come to Rangers, and it made us think recently about how things are different now. And how they may be the same too…

Let’s not forget, the SPL was no pull for these guys – the Dutch Eredivisie back then was stronger than it is now – the PSVs, Ajaxes and Feyenoords in the late 90s were strong sides, close to being genuine European heavyweights.

Rangers’ win in Eindhoven was mammoth – almost unbelievable and the trashing we gave them at Ibrox truly awesome.

But today, similarly, the SPL is no pull for a Dutch player, so why are we suggesting Feyenoord’s Steven Berghuis?

Well, we look at the Helander and Kent examples – both signed for big money, ditto Connor Goldson, and that makes us aware this club is comfortable spending the kind of money we used to, again.

The difference is now we spend within our means – we make controlled losses to ensure progress on the pitch, and we secure it. Back under SDM it was just spending money we simply didn’t have.

So when we look back to 1998- and see the multimillion signings coming in, it wasn’t the SPL which attracted them, but, frankly, the acquisition of Advocaat himself and the lure of the Champions League.

Those, along with a few quid of course, could tempt players we were maybe not quite able to get under Walter, although he too made some major signings as well, naturally.

But now, with all due respect to Dick and Walter, Rangers have a box office manager, one who has clout globally – players are willing to play for Steven Gerrard alone, and with the fact it’s Rangers as well, plus Europa League football, there’s an attraction now that perhaps there wasn’t even two years ago.

Can Rangers repeat 1998’s revolution. No, and there’s no need to.

But an individually stunning signing here and there is certainly within our grasp again – look at Kent.

And that’s why Berghuis, or any other major player, now may not be the pipe dream they were once upon a time.

The truth is Rangers are careful with our money – we are starting to generate the kind of cash we’ll need going forward, but it’s by no means a completed process – the accounts losses showed there’s still work to do to make sure signings like Kent or a Berghuis can be done safely.

Maybe we won’t see that level of signing again for a while, but the securing of young Ryan showed it still very much can be done.