Home Rangers Scottish press lying about Rangers prior to Rotterdam 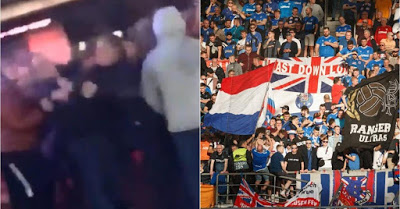 Rangers fans were left bewildered and amused, with a hint of outrage, as a national tabloid used a small scuffle in Amsterdam for back page headlines that ‘violence had erupted’ among the Rangers support on Holland.

Once again the red top used Rangers for hits, as it used a Celtic fan’s footage (yes really) of a modest group of men while two of them had a mild set to before being intercepted by police in Holland’s leisure-smoking capital.

The fact the match in question is of course taking place in Rotterdam clearly is neither here nor there, and the paper was clearly trying to invoke memories of Manchester when real trouble did erupt – but two wee neds having a fight before being separated in a controlled fashion by police probably doesn’t qualify.

Scotland’s press has always liked to use Rangers negatively for hits, for sales, for attention – and this was no different.

‘Violence erupts’ – more like ‘two drunk guys have a scuffle’, and said paper was only too happy as well to nick the filmer’s footage without even asking his permission.

You have to laugh…