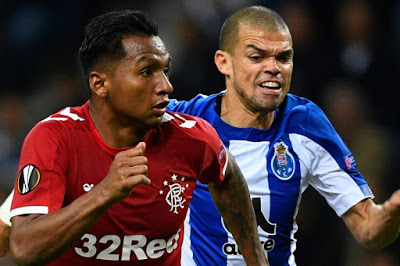 Rangers’ defence has not exactly been overly praised this season, despite the overall success of the team.

Connor Goldson certainly and to a lesser extent Filip Helander have hardly been the toast of fans, with many, ourselves certainly included, advocating the selection of Croat Nikola Katic instead.

And yet, these two stoppers are superior to Portuguese giant Pepe in a number of ways this season in the Europa League and the stats back it up.

In terms of blocks, both Helander and Goldson outrank Pepe at 0.6 a game to his 0 – over the course of 4 games this gives some idea why Porto have underperformed so badly. He’s never managed a single one.

But it gets worse for the Portuguese:

In terms of clearances, Goldson tops the entire chart for group G weighing in at 6.4 a match while Helander isn’t far behind at 4.4. Pepe is a little behind this at 3.

We will admit for tackles Pepe wins, with 1.2 per match compared with Helander’s 0.6 and Goldson’s 0.2.

When it comes to physical and boots on the ground Pepe is quite the character and neither Helander or Goldson are known for really rolling their sleeves up.

But the stats which seem to count are clearances and blocks – and for these Rangers’ defence ranks highly indeed.

And well above the Portugal legend.