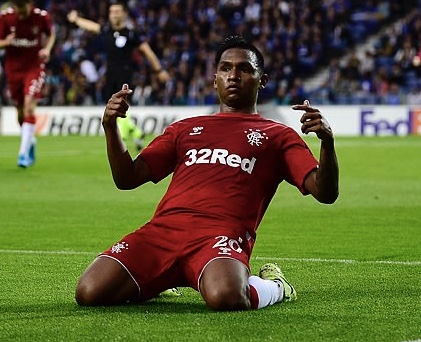 I don’t know about you, but over here at Ibrox Noise we are now absolutely fed up with the never-ending transfer circus surrounds our team.
In 2017, Alfredo was just in the door, and three months later we woke up to the news that Aston Villa were one of five Championship clubs tracking in-form Rangers striker Alfredo Morelos.
Clearly someone with Celtic leanings had woken up that morning, realised Alfredo could play, and was already trying to sabotage our team, by asking anyone, anywhere to come in and buy our best players.
Yep, you’re that obvious Mr. Sutton.
Then for three winters in succession, almost like clockwork Gerrard has had to put out the exact same “news” release saying Alfred is not going anywhere over the winter break, and every year we get the exact same drumbeat that Alfredo is leaving.
Because Gerrard seems so relaxed and confident about this, now makes me one wonder if all Rangers players have something in their contract, which stipulates they cannot negotiate a transfer outside of the summer transfer season? It certainly could explain a lot.
So, is all this noise the work of the players’ agents? Or, is it the work of obsessed Celtic fans, who dress themselves up as “neutral journalists”, who just want to tear apart our team?
My bet is on the Celtic fans, because you just never hear about Celtic players being the centre of so much speculation, from so many different English clubs.
In fact, we are now at the point that it seems the entire Rangers team is up for grabs every single transfer window.
So, what are the facts.
Aside from the now solid fact that we have been bombarded by so much fake news from so many supposed reputable newspapers, it’s making all our heads spin, it is clear that Alfredo Morelos would need his head examined if he went anywhere in January.
Even if Rangers fail to qualify for the play-offs the problem is Alfred cannot play for any other team. The reason is simple. He is cup-tied.
So, there is absolutely no incentve for Alfredo to go to any other team in the January window.
Then there are the teams that Alfredo is being linked to.
Aston Villa is a name that has come up every year, as has Bordeaux, but let’s be honest here. Why would Alfredo want to move to an English team that would almost certainly end up in the middle of the English premier League?
He would not be able to strut his stuff in the Champions League, or in Europa.
So, unless the English team making the offer can guarantee European football every year, it is clear that Morelos will not be going to them, period.
That then leaves us with the following six teams Liverpool, Leicester, Chelsea, Man City, Arsenal, Manchester United as the best potential likely candidates.
Of these I could only see Leicester mounting a serious offer. However, I just cannot see any of these teams modifying any of their game plans to accommodate Alfredo’s style of play.
As his prior manager has already noted, Alfredo is a goal-scoring genius, but that is only because the entire Rangers team is constructed around him. And even when he is not scoring, he is usually dragging defenders the wrong way.
The truth is he is not going to get the same care and attention in the English league. If he fits into the team he fits in. If he doesn’t, then he will be dropped; and all these teams can afford very tall, very technically gifted, proven goal-scorers, and I really just do not see them taking a risk with Alfredo.
But what happens if we do suddenly get a serious offer for Alfredo from a team that Alfredo could not say no to. How much is he really worth.
Because we are looking at the English top six, then we have to look at 80 to 120 million range.
Here fair is fair.
Rangers had to spend all their profits from the Europa League, seven million pounds, just to buy just one player from Liverpool, who had not even played one full game in the EPL.
If they want a proven goal-scorer, someone who has proven they can already score against the top teams in the world, then they need to start dishing out their humungous cup winnings to us. Fair is fair, and the top English teams now rake in close to a quarter of a billion a year.