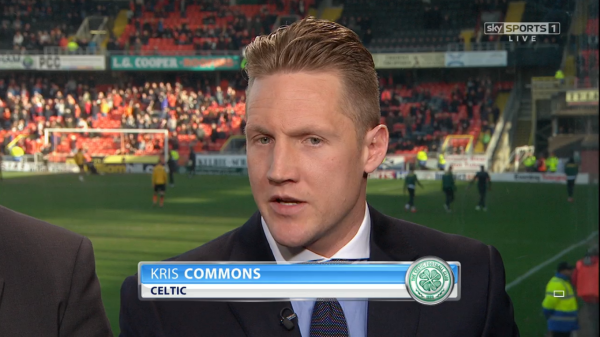 While Gerrard signed the former Aberdeen forward, the 29-year old hasn’t had many chances to shine, with the manager not seemingly being convinced by his attributes, but gave the ex-Killie man a shock chance at the weekend, one the attacker took well.

But it didn’t exactly prove he was Rangers’ best forward, just that he was capable of playing well enough in a match to justify his place in a Rangers jersey.

But Commons rather ludicrously went further:

“I found Gerrard’s post-match comments on Saturday a bit strange, given how good Stewart had been and how key he had been to victory. He had admitted that Stewart had taken his chance, before then saying that the performance had ‘given me something to think about’. Sorry, but what is there to think about? The answer is staring Gerrard square in the face because, on that form, Stewart is his most creative player. As a player, I wouldn’t like to hear my manager saying something like that about me. It’s almost as if he’s saying: ‘Okay, so Greg’s part of my second string, but I might think about playing him more in the future’. Basically, it sounds as if Gerrard still isn’t fully convinced, which begs the question of why he chose to sign him in the first place? Stewart is far better than that. Look at the abundance of wide players at the club – Jordan Jones, Ryan Kent, Sheyi Ojo and Brandon Barker. When he’s on top form, I’d take Stewart ahead of any of them. It’s time for Gerrard to show more trust and faith in him. After this performance on Saturday, the Rangers manager shouldn’t be speaking about him like he’s some kind of outcast.”

Stewart played well, there’s no denying it was his finest 90 minutes in a Rangers shirt, but this isn’t saying much given how little he played previously and how poor to average he’d been.

Gerrard is absolutely dead right – Stewart has given him something to think about, because it seems utterly bizarre beyond words to suggest on one showing that Stewart has proved himself a better attacker than Jordan Jones or £7.5M man Ryan Kent.

It seems, frankly, just an excuse to attack Rangers’ manager without attaching a lot of logic to the criticism.

This is not an attack on Stewart, incidentally. Regulars will know we were big advocates of his signing, and we felt he’d surprise some people – but the signing hadn’t worked out an iota till Saturday so it seems utterly emotional and knee jerk to surmise one good performance makes him better than Ryan Kent. We do think he’s deserved more than this up till now, we think he’s an honourable player whose career probably didn’t go as well as he’d hoped – but he has a chance now to right those wrongs and prove many people wrong.

Saturday went a long way towards doing that, but he would have to do a lot more than one good match to prove he’s better than an NI international and a £7.5M winger.

And Commons knows that fine well.