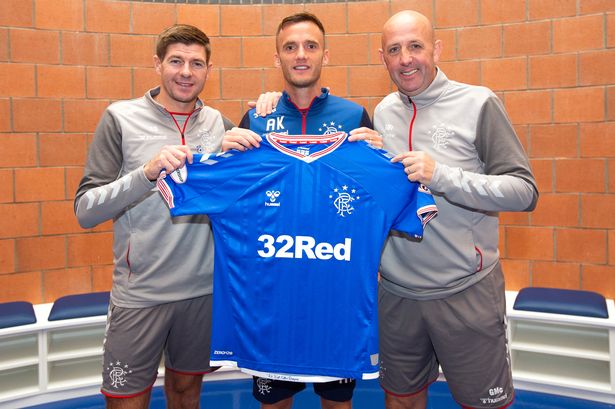 Here’s a shock for you on Ibrox Noise – this is our first article, weeks after he signed, on Andy King.

Earlier we brought you our curiosity over the Ross McCrorie, Glen Kamara and Andy King triangle, but we’ve never covered the Leicester man here.

And quite honestly, the simple reason for that is we doubt there’s been a signing made at Ibrox which has underwhelmed supporters more than King.

Before we go on, we are not smearing the Welsh international – we’ve even been complimentary of one of his two sub appearances, against St Mirren where he actually did play with some clever footwork and composed touches.

And his CV, as a Premier League winner and Wales’ top cap, can certainly not be attacked by such Neanderthals as ourselves, so this piece is not meant to crucify him.

But we just have no idea why he’s here, and Ross McCrorie isn’t.

We have taken on a player, on loan, who hasn’t played more than 25 league matches in a season since 2014, and who spent the last two campaigns in the Premier League 2 and English Championship.

In short, this 30-year old utility midfielder seems the strangest signing to bring on loan when we could have had Ross McCrorie instead.

50 caps for Wales tells its own story of his quality, but this is about the club player – and that one has been a busted flush for the past two seasons.

We know this sounds harsh, and In Gerrard We Trust and all that, and if anyone knows a midfielder it’s Steven flipping Gerrard etc – but a 30-year old loan for a season rather than McCrorie?

People say Ross would just have been on the bench – but isn’t that the error – should he not be considered ready for the first team? At 21 and the captain of the national side, McCrorie has surely proven his quality and his readiness to be considered at Ibrox, but despite a fairly productive season last campaign, the possibility of him being a first-teamer this term doesn’t seem to have computed.

And instead we have a guy who’s hardly played any football the past two years. On loan.

We’re not totally sure about all this.