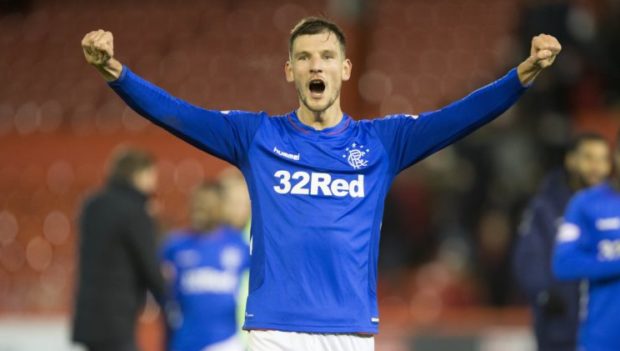 After another stodgy 90 minutes following Thursday, Rangers went one better this time with the win. Ibrox Noise brings you our match ratings on an afternoon which could already be pivotal to the title race.

One bad throw out and a near-concession from a cross-turn-shot, and McGregor can otherwise say he had nothing really to do. Not a save to make. 5

Bombed up the right a tonne in the first half and pepped in a glut of crosses, some of which were very decent. Faded a little in prominence in the second half but overall heavily involved. Wasn’t needed defensively. 7

Some excellent aerial work at both ends, but was nearly guilty of conceding a terrible penalty. A solid afternoon on which ultimately he wasn’t hugely pushed. 6

Some decent moments defensively but some very shaky ones too, Helander still looks like he’s some way off the pace, and it’ll take time. 5

Well this is a bizarre one. If it wasn’t for his goal and bloody mouth, Barisic’s impact on this match would be like a wasted shirt. He rarely made any telling attacking runs, got in one half decent defensive block, and hardly touched the ball in general. Then randomly went down bleeding from his mouth. But that goal was mesmerising and gave a glimpse of what he’s capable of. Just a pity he doesn’t actually do it. We can’t even decide on a fair score! He was the match winner with a sterling goal, but otherwise was completely invisible. If not for the goal, 2, if including the goal, 5.

A fairly mundane outing from the mostly out of form Fin, he did reasonably well but struggled to make any telling passes or link up. Defensively he was adequate but it was hardly like he faced much of a threat. 5

This was by some distance Aribo’s worst performance. He lost the ball a few times, struggled to get into the match, and while we did see some glimpses of his quality, this just wasn’t his afternoon. 4

It’s not saying much on a very stale afternoon, but he was marginally Rangers’ best player ahead of Tav, even if their scores are the same. He was steady, reliable, and while he wasn’t able to affect the game much in an attacking sense (he was back to playing as a defensive mid) he was always on the ball. Probably had the most of it of anyone on the park. Certainly in the first half. 7

Some tidy link up in the first half and got a near-assist for Defoe’s staggering miss, but otherwise a fairly tepid display from Arfield and not one he’ll remember with fondness. 5

Lively running but unable to do a lot with it, this was a very ineffectual display from the NI international and most times he ran with the ball he lost it. Average at best. 5

Quite simply Defoe’s worst performance in the shirt – his opening appalling miss set the tone for his afternoon, and he lost the ball a number of times while failing to link up with accuracy with anyone. His slide rule attempt for Kamara summed him up. An uncharacteristically weak display. 4

Was a menace – a couple of excellent touches and runs, and looked brighter than Defoe had. 6

Tidy enough, and one or two good defensive interceptions. 6

Surprisingly nifty – didn’t waste a pass, and showed some clean footwork as well. 6

Steven Gerrard picked the team we brought you earlier today, but this was only a prediction and not the best team we reckoned he could pick. He won’t be happy at Rangers’ current goal-shy nature, and even a switch in formation in the second half to 4-3-2-1 made no difference. Two matches in a row where Gerrard’s system has been quite easily snuffed out – you can give credit to a big European team like Legia doing it, but St Mirren? 0 goals in open play in 180 minutes is deeply concerning and it’s not the form the manager would have wanted going into this massive week. 5