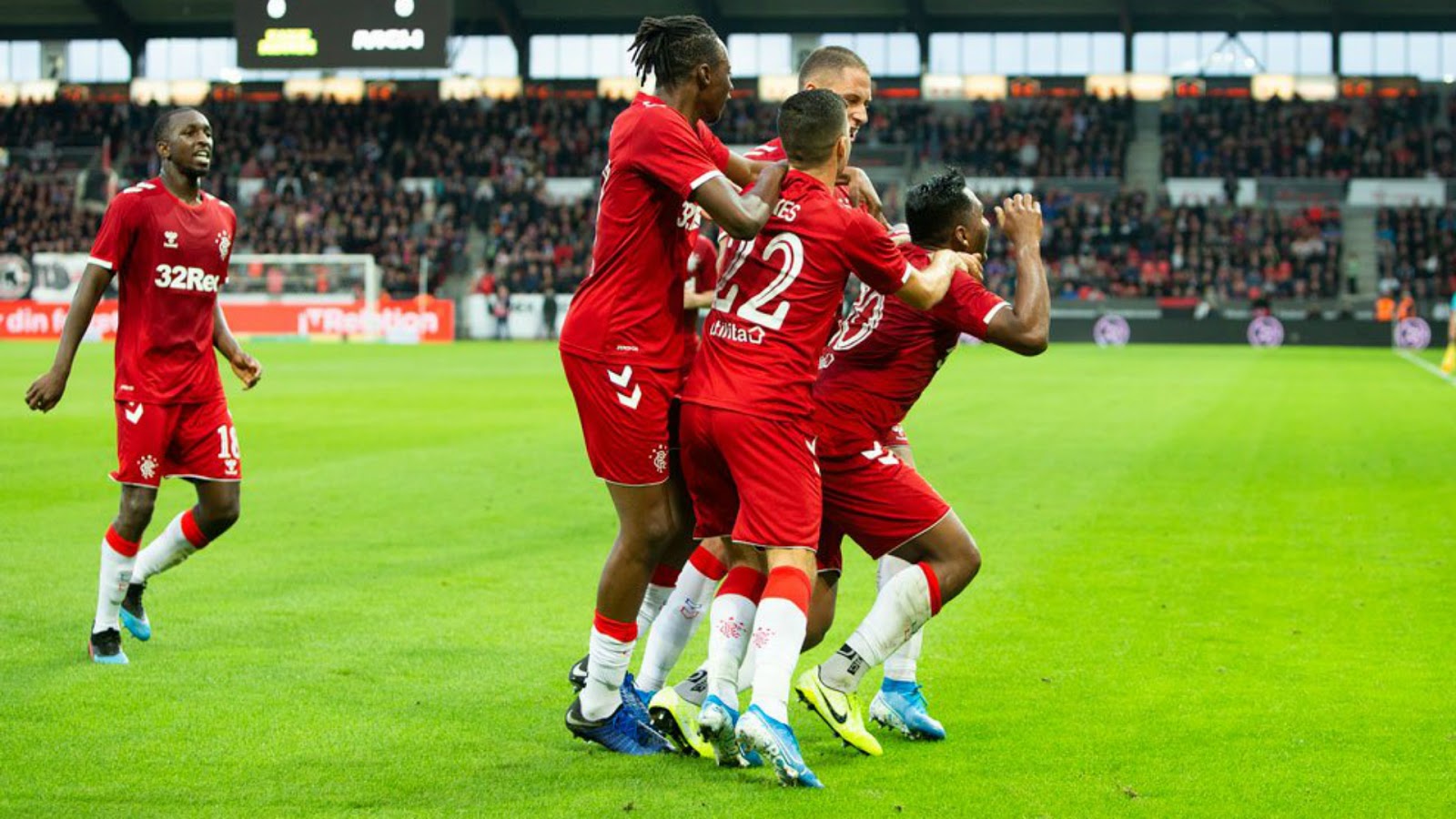 Rangers opened up their third round in the UEL with a lively banger against Midtjylland. A 2-4 win was secured in Denmark to make a meeting with Legia look nearly inevitable.

Ibrox Noise brings you match ratings on the night where Stevie’s Rangers conceded two for the first time this season.

Actually a good performance – this was the toughest match so far of this season and McGregor was up to it. Some very good saves stopped the Danes outright winning this one, and his leadership was strong with plenty of communication and direction to the men around him. 8

He just isn’t at it at the moment. He’s crossing early every time because he doesn’t have Candeias to overlap with, and his defending last night was shaky at best, and exposed at worst. He got embarrassed more than once. His dribbling doesn’t have the punch it used to, and if this is how Tavernier will be going forward, we’d be better off selling. 5

This was a really good performance from the big man – he combined solid ground work with strong aerial, and was mostly in a good reading position of the game throughout. Didn’t make too many errors. Been an upturn in form from this guy – looks like he’s taking the competition seriously. 8

Best he’s been since the start of last season. Even overlooking his (brilliant) goal his frame was everywhere. Put himself in the hurt, but did so with consideration rather than blindly throwing himself in. Attacked with vigour, aerially dominant, and got over his early error clashing with Aribo brilliantly. Almost faultless. 9

An unexpected return for Flanno and he did very well indeed – better than either Halliday or Barisic this season. Read the game, defending resolutely, and worked hard – this was a good return and both of his peers will have to go some to get their places back. 8

Ah, Glen, we have missed you. A return to form for the Fin, just in time – such a weak pre-season but this one was a lot better. No mistakes, good use of the ball, and hard working – just like the split Kamara. Big improvement. 8

A strange one from Jack – he was actually good but did make some telling and careless errors and lost his discipline too. Mostly reliable and got everywhere but just those few minor blips. 7

Media and the club and fans hyping this guy’s performance but aside the goal we honestly aren’t buying it. He was barely involved, and while it grew as the game advanced, this still isn’t the rampaging colossus we saw in pre-season. 6

Another one who had a terrible and quiet match and is clearly struggling for fitness. He did make a few very telling runs and his goal was a fine finish but overall the fella needs a break. 6

All of Rangers’ attacking quality support came from Jones. Made Ryan Kent look a distant memory and was a menace at the Danish rear. A few think he’s finally arrived – sorry, he was already here. You just didn’t see it. 9

Another great game from Morelos – a MOTM contender. Brilliant goal, superb supporting play and linked up with everyone. Good touch, and other than faking a kick to the head (Freddo, please ditch this side of your game) he was immense. Big night and it boosted his value big time. 9

Stevie made a few dramatic changes to his team, and they mainly paid off. The team’s performance wasn’t outstanding, but four goals away from home at a top Danish side is a very good return, and a number of his men played big nights indeed. He’ll be happy with how they responded to the two-goal burst from Midt. 8

NB: we see a few sensitive souls have taken our rating of Tavernier personally and want us at the Tower of London for it. Yes, he managed an assist, and played a part in another goal – but his defending was diabolical. He was both exposed several times and got nutmegged too. Aside that assist, his crossing was mostly early and weak. We always find it amusing when we praise this guy, the replies rip us a new one and smear him. When we’re critical, it’s the opposite. Make your minds up folks. Oh, and chill out, enjoy life, and stop being offended because someone expresses an opinion you don’t share.