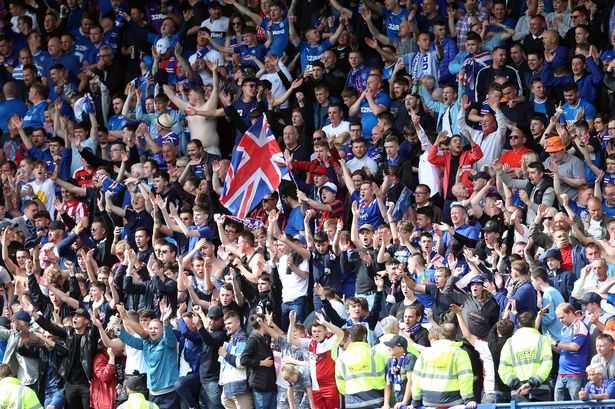 In a recent entry Ibrox Noise downplayed the significance of ‘naughty’ songs a little, feeling there are more important things to worry about.

And, let’s face it, there are. Celtic singing about hating OBs or glorifying the IRA while Rangers go on about the Billy Boys and ancient religious conflicts, while distasteful, isn’t the end of the world. We don’t want it, but feel far more worried about the alcohol-related deaths or gambling addictions and smoking-based cancer this country is blighted by, to name but three, than by the songs it sings about.

That said, this nation’s government and Uefa don’t agree – in fairness we’re not griping that they’re doing their best to cut out sectarian or racist behaviour among fans, and they’ve punished Rangers for our fans’ behaviour in Gibraltar by closing a stand at Ibrox for the return leg v Legia.

The reality is Rangers have a problem with our away fans – we love the enthusiasm, we love the numbers, but for as long as these songs get sung the authorities will always have a stick to beat us with.

Rangers lose potentially a quarter of the backing of Ibrox thanks to this, and after a difficult first leg in which we were unable to secure a priceless away goal, the fans more than usual are needed to be the 12th man.

And now we don’t have a portion of it – the closed stand (Broomloan? Copland?) will be potentially completely empty with 3000 tickets being withdrawn for sale, and Rangers, understandably, have not held back with criticism of the conduct which led to this.

Let’s be clear – for the most part, while we have our disagreements among each other, when it comes to following the Famous and being football fans, Rangers are among the best around – they follow follow wherever their team is, and didn’t dodge out in the lower division.

So this is no way a slight on the fanbase.

But this stuff, while ultimately not really that important, is to the groups who can hurt us, and by indulging in this behaviour, the club is the one hurt, and then, in turn, the fans.

By engaging in this nonsense, you’re only damaging Rangers.

You might think it’s not really that bad. We might think it isn’t. Even Rangers as an institution has bigger things to worry about. But the SPL, SFA, UEFA and FIFA are the ones who hold the cards, and if they say stop, stop.

But some sections of our mostly excellent fanbase aren’t heeding this, and especially away from Ibrox they’re now damaging the club’s reputation.

Every club has had historic issues with certain aspects of its fanbase – it’s part of the passionate support that is football. But usually these incidents are isolated.

“Our supporters have been asked repeatedly by the Club to refrain from indulging in this, and other forms of unacceptable behaviour. Sadly, the warnings have fallen on deaf ears and the actions of this minority will cause the Club and the majority of good and decent Rangers supporters to pay a heavy penalty.”

It’s the repetition of this stuff over the decades which has been the issue – the same stupid offences caused time and time again. And now the minority singing this stuff has cost the club 3000 tickets, including the lost revenue as well as the lost atmosphere and backing.

If we’re honest, we’ve heard Billy Boys at Ibrox as well this season, and it seems to be a song which is chanted either in defiance, or celebration.

Fans get caught up in the passion of the moment and appear unable to restrain themselves from these songs.

We have no idea what the solution is, because 30+ years of searching for one has yielded no results.