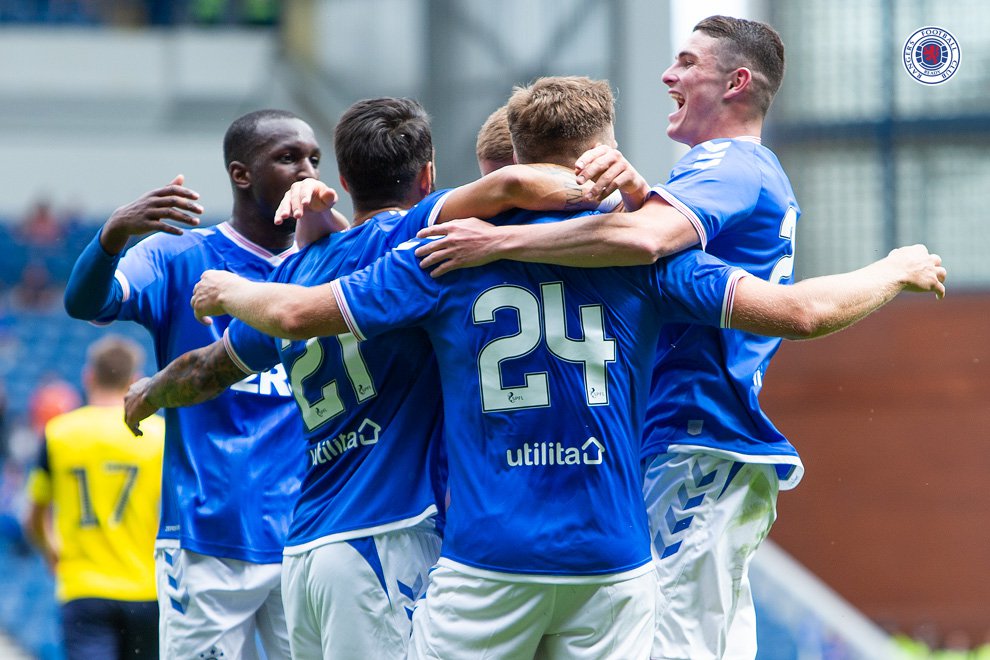 Rangers’ summer pre-season stepped up a gear with its first workout at Ibrox against a fairly able Oxford.

Ibrox Noise takes you through the things we learned against the U’s.

1: Greg Docherty is busting a gut to impress. Having had a stunning season down south, it’s a different player to the one who struggled v Wigan this time last summer. He’s quicker, leaner, and infinitely stronger on the ball. And he’s just a better player. He’s giving Steven Gerrard a huge problem.

2: Ok, it was only a friendly, but the Katic Edmundson partnership was diabolical. While neither of them played horrifically, the communication was non-existent and the few meagre times the visitors threatened, they looked dangerous. And before you say ‘it was the first match together’ – so was Bury last summer and Katic and Goldson were way better together. Early signs of the duo that started yesterday weren’t exactly off to a good start.

3: Matt Polster has given Steven Gerrard a small problem. Chances are James Tavernier’s place remains assured, but the US international showed just why he was so essential for Chicago Fire – while not a marauding flying wing machine like the captain, his defending was excellent and he got forward plenty, but more in support than providing the killer assist. He’s a different kind of RB to Tavernier, but a good one. That much is obvious.

4: Steven Gerrard elected to use the same formation as served Rangers so well in the split. The reliable 4-3-3 was in evidence again, with a three-pronged adaptable attack which frequently swapped positions while in midfield Kamara sat mostly deep and let Docherty surge forward with Aribo supporting. It was pretty effective.

5: Greg Stewart appears to be proving a lot of people wrong – his assist and goal were excellent, and while he’ll never be the glamour striker fans want, he appears to have a hell of a lot more to offer than the man he’s effectively replacing in Kyle Lafferty.

6: Jake Hastie is a hard, hard worker. Yes, he needs to work on a bit of tactical understanding, but he settled better into the role of Rangers player than someone of his age might have in his position (look how long it took Ryan Kent to, and Ovie Ejaria never did) – and he ran like a man possessed to press at times, and we like that work ethic.

7: George Edmundson’s partnership with Katic might have been flimsy, but his distribution was anything but – Rangers’ distribution from deep last season was atrocious, with Goldson, Worrall and Katic all frequently handing opposition the ball back. Edmundson used it in a better fashion, finding a blue shirt most of the time.

8: This was the first time we’ve had a decent Rangers performance without Scott Arfield in the side, for a long, long time. Usually Rangers just don’t play without the Canada captain, but this time the XI who went out were able to produce something resembling a decent display without his presence.

9: Josh McPake is special. In 15 minutes the 17-year old showed why he’s not only Academy POTY but being pursued by Liverpool and Roma. He’s that good. Obviously his development is delicate, and we won’t expect the world from him – the step up to senior football is vast, and it takes a Lionel Messi to adapt from youth teams at 18 immediately to the senior side without a hiccup. McPake must be nurtured carefully. But, from the little we saw, Rangers have something very special in him.

10: Sheyi Ojo showed more on his debut of 10+ minutes than Ryan Kent did by late November. The Liverpool winger was absolute class, rolling men, scoring a brilliant goal, and just looking like he could do this in his sleep. Not got the sheer pace of Kent, but appeared way more productive and confident. We like this kid.

There were a few bits and bobs more to take, but we’ll stop there.

How many did you see – and what others can you bring us?