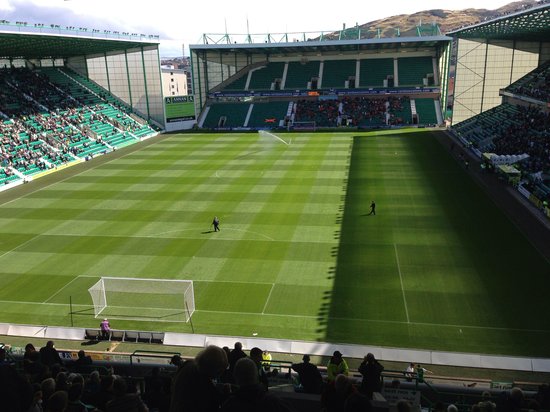 As discussed yesterday by Ibrox Noise’s Kirsty, Cameron Mack, the Eejit of Easter Road, has been sentenced to 100 or 150 days in jail, depending on who you read.

The 22-year old was the moron who ran onto the Edinburgh turf that night to confront James Tavernier in a significant event which could have spelled serious danger for the Rangers captain.

Said moron now claims to have been completely intoxicated that night and remembers nothing of the incident, with his defence lawyer further adding allegations of he and his family receiving death threats and other forms of further violence.

He has claimed police have advised him to take his wife and family and leave their home for good.

It’s difficult to know where to start with this mess. First of all the whole sordid episode is an indictment of the state of Scottish society at present – the mental illness which permeates Scottish behaviour these days could not be more highlighted by his actions and the alleged response.

His actions, in short, were beyond ridiculous – just like the attack on Jack Grealish (we’re sure he too was intoxicated and has now received death threats as well) in England, a complete bampot ran onto the pitch, and no one can condone how serious that is.

Furthermore, married at 22 with two young kids, in his case, doesn’t even sound plausible given we can barely fathom a responsible father and husband being intoxicated before going to the football.

However, the death threats are as unacceptable as his original conduct, and by being a complete idiot all he did was stir the hive of the worst elements of the society. Perhaps, those elements include himself – his wife is a better judge of that than we are.

But either way another moron has ‘made a name for himself’ and has now paid for it big time. But how worryingly easy he got next to Tavernier given the fact he could easily have been carrying is a deep concern to the security measures in place at top-flight football matches.

But then if the Birmingham derby can’t stop these idiots either, what hope does the SPL have?