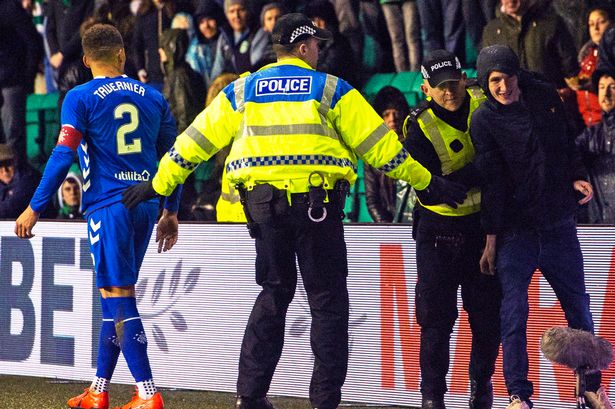 Here at Ibrox Noise we have already spoken at length about the current issue in Scottish football that moronic ‘fans’ think it’s acceptable to launch missiles at players on the pitch. Just on this weekend there have been lighters, pies, coconuts, flares all thrown onto the pitch in Scottish football.

Now on the base level, I don’t blame fans for finding the funny side of a coconut being launched (how did they even get that into the stadium?!) but this is an issue that’s only getting worse.

The ‘fan’ who ran onto the pitch at Easter Road to try and assault captain James Tavernier was today in court. 21-year old Cameron Mack was today jailed for 150 days and hit with a 10-year football ban. Mack’s excuse is that he was ‘intoxicated and remembers little or nothing about the incident’.

That’s now Mr Mack with a Criminal Record because no doubt he thought it would be funny to assault a player of a team not of his allegiance. Was it funny? No. All he achieved was making himself look like a moron.

The same goes for anyone else who thinks it’s ‘funny’ to run onto pitches and aim abuse or aggression at players. Who launch missiles from the stands and let off flares. I do quite wonder how Mr Mack feels now that he’s banged up for 150 days. Would he still reckon it’s worth it?

It is time this is stamped out in Scottish football and pronto. If that means jailing those found guilty and then giving them football bans then so be it. Hell slap it into them.