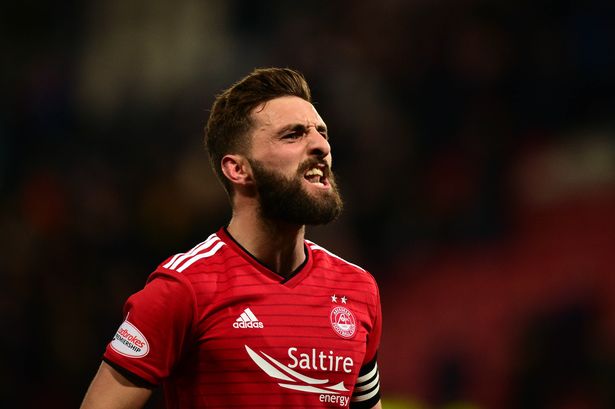 Further to our earlier article about Alex McLeish and his predilections regarding Scotland’s selections these days is a notable player we mentioned in there.

Graeme Shinnie has been linked with Rangers for a very long time now, with a lot of sources claiming Steven Gerrard is serious about taking a second Aberdeen captain to Ibrox in as many years.

A free this summer, Shinnie, 27, has been a regular for his country since last year, and while his style is certainly not the most polished or imbued with finesse, he is certainly effective – and he’s most definitely a leader.

He is, of course, something of a utility player – capable at left back, midfield and defensive midfield, the former Inverness player has seen his value and importance rocket over the past year or so, with a previous value of £500K at least doubling since then.

He might not be quite Paolo Maldini but many fans have oft-complained of a rudderless lack of leadership – and while some could have projected Ryan Jack for that role, the truth is, to us anyway, he doesn’t scream of being a captain.

Shinnie, we have to admit, does. He inspires those around him and is a major reason Gerrard has struggled against the Dons this season – Rangers need that kind of alpha player, because right now there just aren’t enough leaders on Rangers’ pitch – Tavernier still hasn’t convinced anyone he’s the right captain, while the only remaining options are McGregor and Arfield.

A proper alpha in midfield or left back to really rally those around them is something Rangers are missing.

Whether it’s to be Shinnie in there or not, only time will tell.