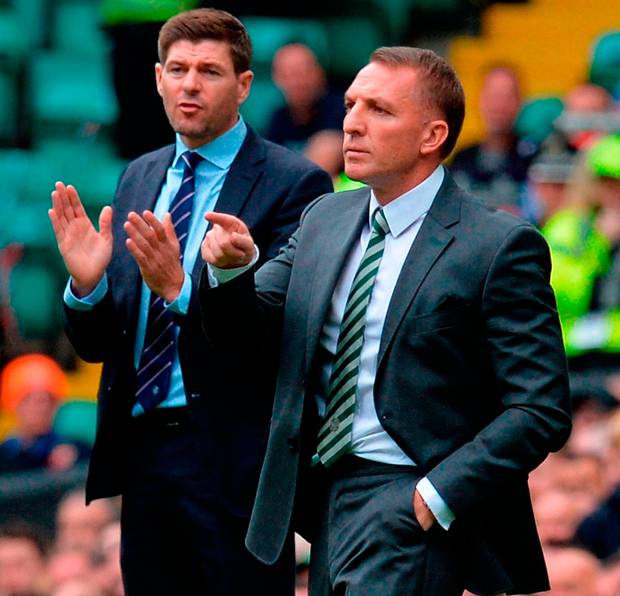 So as the fallout over Brendan Rodgers’ untimely exit from Parkhead continues, we thought we’d have a look at his record and its merits.

We’ve previously been on record as admitting he’s one of their most successful managers, of all time, basically, which is evidently why his sudden departure cuts to the bone of their supporters so much.

However, for all the 7 trophies of 9 and treble treble stuff we hear, how much is actually valid?

The initial reaction is of course to point that that despite Rangers being miles off the usual standard of a Rangers we’d know and love, nevertheless his Celtic side did steam roller everything in its path effectively for the entire time he was manager.

He won every trophy he contended, and probably would have won the final two for the 3×3. And surely a weak Rangers doesn’t negate from the fact Rodgers also gubbed the rest of the league too? That you can only beat what is put in front of you?

Well, actually, yes it does.

Brendan Rodgers, like Deila before him, and like the tail end of Lennon before him, strolled pretty much unchallenged to the SPL title – and there’s a very good reason for why Rangers’ absence or weakness matters so much.

It’s not just that Rangers weren’t great – it was the fact there was no team competing with Rodgers at all – no team pushing his Celtic to win, no team who would capitalise on a slip up – when you put real pressure on a team, that’s when they’re truly tested, that’s when they slip up here and there and you have a real title race.

Rodgers had nothing to threaten him – so his team complacently strolled to trophy after trophy without a Rangers who could push them to mistakes, to cause the Helicopter Sundays – not like before.

It’s easy to win against rubbish opposition week-in-week-out – and make no mistake, the SPL has been manure the past 7+ years – even this season isn’t a huge step up, with Rangers still 8 points behind.

And so Rodgers, sure, he won it all, but just how would he have fared against Walter’s Rangers?

It matters more when there’s competition on it.