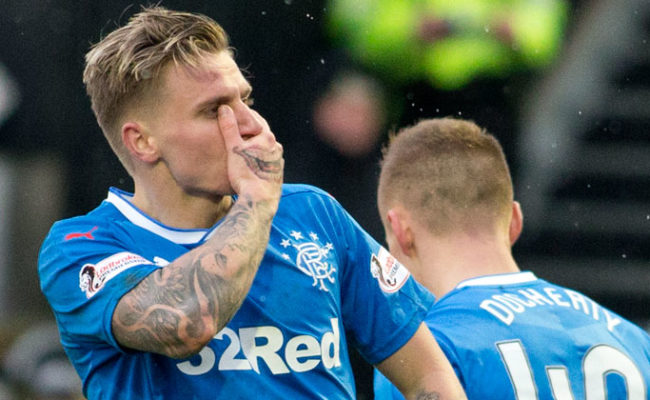 With Rangers’ progress stuttering a little of late, we at Ibrox Noise had an idea to look into the ‘not Rangers’ area. That is, significant players Steven Gerrard rejected in favour of other squad members or his own signings.

Which ones did he get right, and which ones do we miss?

Kind of a stick on, Holt, honourable wee player, never seemed good enough for Rangers once promoted, and despite his goal yesterday, he’s not someone we miss at all. Verdict: correct

Still rankles this one – tearing up League One, Docherty has been a revelation for a truly terrible side, standing out as one of the division’s best players among it all. He’s one we feel would be better suited inside a blue shirt rather than Coulibaly. Verdict: wrong

Cummings was creaming himself to play for us, and would have cost very little, but Stevie just wasn’t interested and instead went with Umar Sadiq then Jermain Defoe. Bright start to life at Peterborough but the goals dried up and he’s now languishing on Luton’s bench having had just one league appearance – comically enough with a goal. Verdict: wrong

Having a fine time at Scunthorpe, Alnwick is a better keeper than Foderingham and Firth, and has proven that in our shirt and down south too. But he’s no Allan McGregor. Verdict: wrong

Stevie wasn’t interested. Not hard to see why. Verdict: correct

There are conflicting claims from both camps about who actually initiated this departure – but Windass claimed Gerrard wasn’t happy at his decision, but did little to fight to keep him, while Gerrard himself said the player was set on going. Tricky one but with 9 assists and goals in the Championship, Windass has done quite well down south given Rangers’ painful lack of a 10. Verdict: wrong

Given all our issues at LB, it’s easy to say this was a huge booboo – but John has hardly played for Swansea through injury and loss of favour. That said, he was extremely good for us, and by no means any worse than what we have. Verdict: wrong

We can’t understand why this kid isn’t more favoured – he keeps doing it at every level but won’t be given a chance at Ibrox. By any manager. With 5 in 14 for Livi, he’s a player that produces. We’d love him back. Verdict: wrong

Another striker, with two goals and two assists in league one, plus 6 and 4 in total, Dodoo has actually been pretty decent for Blackpool. Better than what we have? Hard to say really – but we probably don’t miss him that much. Verdict: correct

Never clinched a first-team place and failed to convince at LB, Hodson is over at St Mirren these days and does his thing quietly. He’s a modest fullback but probably surplus at Ibrox. Verdict: correct

These are only a few of them – we can’t help feeling the Docherties, Cummings, Hardies and Johns would have been better at Ibrox, but then we’re equally happy the likes of Pena and Herrera (remember him) aren’t around these days.