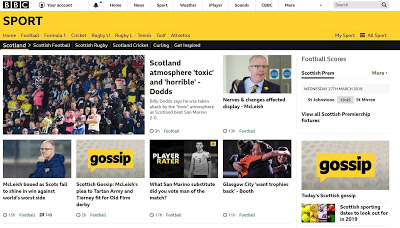 On top of the assault on Gary McAllister, we really must have a look at the BBC’s whitewash of it.

Now, remember, whenever anything happened to Neil Lennon, it would be splashed all over the BBC – especially the nails episode. While never condoning these cowardly acts, Lennon was never a saint and provoked the worst elements in society with some of his behaviour. But nevertheless he was attacked or targeted by vile assaults and the BBC frequently plugged it as their top story.

Gary McAllister attacked in Leeds town centre? Not a peep. It only just got into their ‘gossip’ section and newspaper headline pages because they were forced to do so by the nature of those sections – especially the latter.

But in terms of main news? Not a peep, as you’ll see from their Scottish front page above.

It’s one thing to be anti-Rangers and negative in your Rangers reporting, we’re used to it by now. But to completely radio silence an attack on a major figure in Scottish football because of the colour of his training shirt is again a breach of the BBC’s own rules of neutrality.

Indeed, the Beeb, or Pacific Quay, regularly violate their own guidelines over Rangers, and flaunt the fundamental bedrocks of impartiality which are supposed to set them apart from other outlets.

But completely ignoring this one is an almost comedic new low for the Beeb – we know they’ve the Scotland fiasco to focus on but if they can cover Glasgow City women’s football they can surely cover a huge figure in Scotland being assaulted?