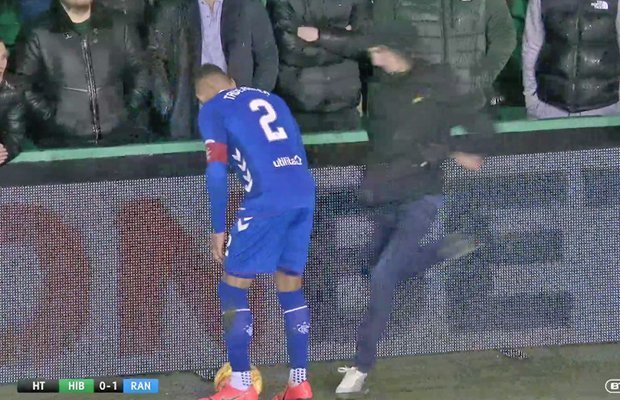 Hibs’ chief Leann Dempster has wholeheartedly apologised to Rangers’ captain for the latest disgraceful incident to blight the filthy game that the Scottish Premiership has become the past five years.

A true backwater league now, as if it wasn’t before, the repeated and incessant incidents which happen under the guise of football support have now officially won and Scotland’s glory days of the 80s, 90s and even 00s have made way to the maniacs of our country taking over the asylum and ruining what was once a very proud nation.

Make no mistake, Scottish football is a laughing stock around the world now – one that is routinely mocked and dismissed, while rightly judged for the cesspit it has become in the past decade.

For a complete moron to invade Easter Road’s pitch and attack James Tavernier is sadly the kind of sewer-dwelling trash we are now expecting regularly in our game. It’s no longer a shock to see idiots try to clobber players, we saw that already in the cup final from the same fans only three years ago – and back then it was the players who got most of the blame. Rangers players, obviously.

It’s no longer a shock to see missiles thrown at Scott Sinclair, or Kris Boyd, or vile chants aimed at everyone, or folk spitting on the unconscious.

Scotland is now poison, in every sense, but crucially, to the interest of this site, in football.

Whether it’s social politics, public votes, or the rise of nationalism and whatever else changes a nation and divides it, the effects of the mentally ill country our nation has become is seen borderline every week at football.

A once safe and family occasion has been turned into a morally bankrupt hole where the lowest troglodytes of society turn out to cause havoc and bring shame.

This is not to say football was always butter won’t melt. Far from it – we’ve had incidents in the past, with the Old Firm shame game being the watershed moment in the 90s.

But back then those were the absolute exception and they shocked this country – nowadays social media reacts in moral outrage, then it’s forgotten about till the next one the week later. As has sadly become the norm.

Like the UK, Scotland has been hijacked by political and religious agendas (topics for smarter people than this site) but these have given rise to such chasmic divides which seep into every other area of our country – and football is one of the biggest.

And the past 10 years’ rapid decline have led us to this point. Where it’s almost normal for a bampot to pitch invade and attack a professional footballer.

What a complete sh*tshow.