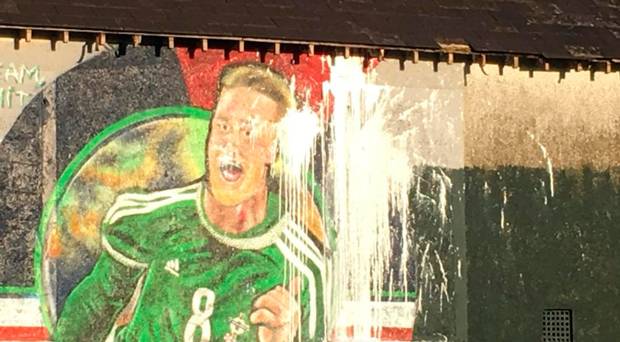 Steven Gerrard last night claimed star January signing Steven Davis has been ill this week, but his omission from the starting XI and relegation to the subs bench probably owes more to events in his home town and, to an extent, his consequent poor performance against St Mirren than any physical illness.

The 34-year old’s form since returning to Ibrox has been steadily deteriorating and after his substitution off against the Buddies following a disappointing display, his place on the bench in the following match was a modest indictment of his overall form and likelihood that he is not anywhere currently near a sure starter – but after a mural of himself was defaced for the fourth time in a month in his homeland, we do suspect that’s more than playing on his mind too.

Davis looked in decent enough condition at training, but even despite illness and off-field trauma, we’re not sure where he’d have fitted into last night’s team in any case, and the fact Lassana Coulibaly was brought on ahead of him late on was maybe a bit of a favour to him by Gerrard.

And of course, why even have him on the bench when he wouldn’t be able to offer much?

It’s a strange one – we were happy to sign Davis, but while there is plenty of time for him yet to make an impact, we’re hoping that’s sooner rather than later and he also gets issues in his personal life seen to.

He’s a classy player with tonnes of experience, and there’s inconsistency about him just like in his first spell at the club, and that inconsistency is currently significant and affecting his performances but when a mural of you gets defaced repeatedly, that’s a pretty big cause.

Right now, he may be a squad player, which is a very surprising outcome after the hullabaloo over his signing but his state of mind isn’t being helped.

It’s an odd one and we do hope he gets resolution soon.