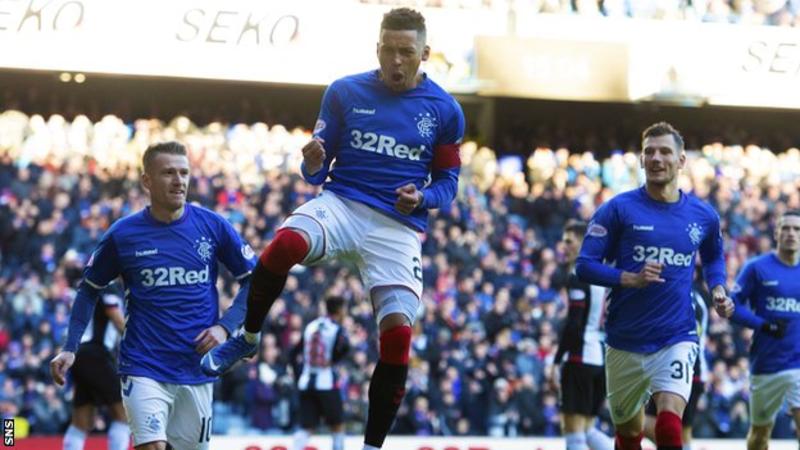 Full time has blown at Ibrox after an ultimately comfortable afternoon’s work against a pretty meek St Mirren. Ibrox Noise takes you through some of what we learned after this 4-0 stroll against the Buddies:

1: Jermain Defoe has finally arrived. It took the 36-year old a fair old time to get up to speed, and it was ‘only St Mirren’ but this was the first time he’s actually looked the part and made Ibrox Noise’s projections of his prospects look silly. He was strong, quick, hard-working, a good team player, a deft touch and used all his experience to completely outclass St Mirren’s backline. He was a little fortunate to be awarded the second penalty (we’re not sure how much contact there really was) but he showed huge improvement and even a potential to play as one up front.

2: Alfredo Morelos needs to grow up – once again playing with a petted lip, his reaction to not being given the third penalty sums his immaturity up. When he’s on fire he’s a £20M striker who causes mayhem for opponents, when he’s like this he’s a selfish brat who must quit the egocentrism.

3: Steven Davis is struggling with fitness, despite his claims otherwise – while his early play was polished, he started to derail badly and after a succession of crude fouls was rightly withdrawn. May be some time before we see his real form emerge.

4: The Nikola Katic and Joe Worrall partnership really isn’t that bad – it’s conceded all of two goals in three outings, and was completely untroubled in this one – both put in good blocks and seemed to have a reasonable understanding. Steven Gerrard will be happy with how his youngest CBs are starting to develop.

5: Scott Arfield keeps showing just how important he is – his on ball and off ball work was pure team spirit and team ethic, and on top of the grit and determination is his classy play too. He is quietly one of the most important players in the squad.

6: The diamond doesn’t work. It’s simple – Rangers had to rely on three penalties plus a late formation change to win this one – midfield as a whole just isn’t clicking with this system, and Ryan Kent mostly hugged the left to be effective. Can we please just ditch this terrible system?

7: Gareth McAuley seems to have either drifted out the team picture of late or is being saved for Aberdeen – we were sure he’d feature in this one but he was nowhere to be seen.

We’ll have more reaction in due course but for now, what were your thoughts?