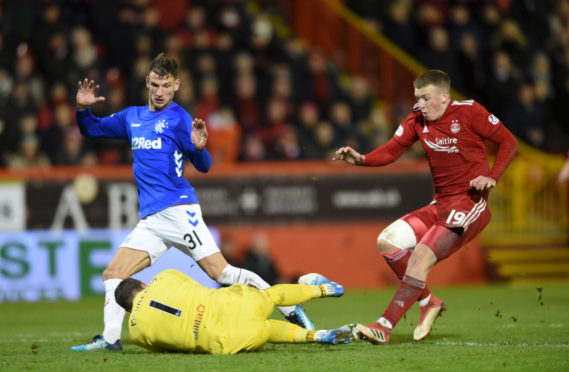 The worst-kept secret in Scottish football is now out – Allan McGregor’s appeal was rejected and the keeper will serve a two-match ban for his foolish studs out at Lewis Ferguson’s shin.

Before we go on, we are in no way defending McGregor’s offence – it was snippy, it was malicious, and it was an unnecessary amount of needle where none was needed.

But as we discussed earlier, we awaited the outcome of this hearing with great interest given how no action was taken upon either Kilmarnock’s Alan Power for his reckless high boot, or indeed St Mirren’s Paul McGinn for an elbow in the face of Cammy Smith.

But Alfredo Morelos was banned for three matches and as we suggested earlier, Rangers played a blinder pushing the hearing for McGregor back till today in order to create a precedented barometer of measurement for what was deemed acceptable.

And lo and behold, after McGinn and Power got off scott-free, Morelos’ already significant suspension has been compounded by McGregor’s.

The SFA’s clear bias against Rangers is pretty evident now – we’re not defending Morelos or McGregor’s antics, we’re asking why other clubs appear to get away with exactly the same thing, or worse.

We’ve known the powers-that-be in this country have been tainted against Rangers ever since the Loch Lomond incident – more on that later.

But these days they don’t even bother to hide it.

Remember the days when we made jokes about any bad incident anywhere on planet earth and the SFA would fine Rangers for it? Well, it’s going that way with player punishment too.

Sadly, unless we see the deeply entrenched and rather insidious regime currently occupying the grass roots of the game north of the border get smoked out, it’s the way it’s going to remain for the foreseeable future.

And that’s a long time.