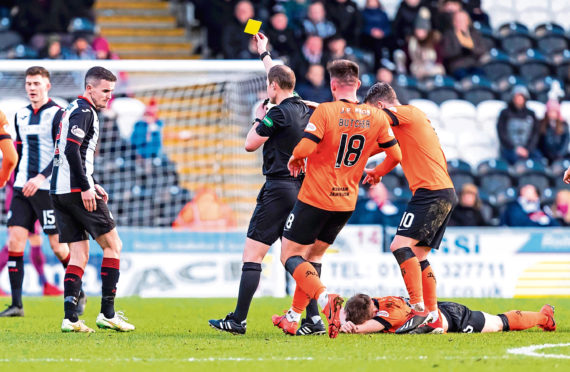 As Rangers fans, us Bears know a lot about hate these days. No one Likes Us We Don’t Care has always been our defiant motto, but since 2012 we have certainly felt that hatred magnify exponentially.

However, Scottish football plunged to possibly the lowest rung of bowel-scraping hate and horror at St Mirren Park when a portion of the natives decided the best way to help a fan of their opponents Dundee United who was lying unconscious with head injuries was to throw missiles at him and spit on him.

It’s not often we’re lost for words by the hate the human mind appears to be capable of sinking to these days, but this incident has left us close.

To outline the level of loss of humanity here is probably about the best way to sum it up – a human being, lying unconscious and in vital need of medical attention being spat on with missiles hurled on him.

When did people lose their basic respect for life?

We know that fans do lose their minds at football, that we all get caught up in the emotion and act in ways we simply don’t outwith the ground.

But there’s something wrong in this instance, when hate for an opponent goes so far as to enjoy his suffering and inflict further upon him.

Each person who did this – would they be proud to own up to it to their families? To their children?

What stories will they tell their grandchildren? “You know there was once a time we played at home and I spat globules of filth at an innocent man lying unconscious – oh those were the days.”

In the past six or seven years, aided and abetted by the rise of social media, people have simply lost their decency – especially when it comes to football.

We get all kinds of abuse on Ibrox Noise from grown men (and women) who should know better just because they disagree – and that kind of abuse has sadly filtered into the ‘real world’ where it is deemed appropriate to grog up on a helpless and injured man lying defenceless on the ground.

The club of course completely condemned this behaviour and pulled no punches in describing it or trying to shame those guilty – but it’s a sad time these days that we have to praise decent behaviour because the horrible stuff is becoming the majority.

Scottish football really is plunging into a vile black abyss of depravity and we see no pulling it back from the brink any more.